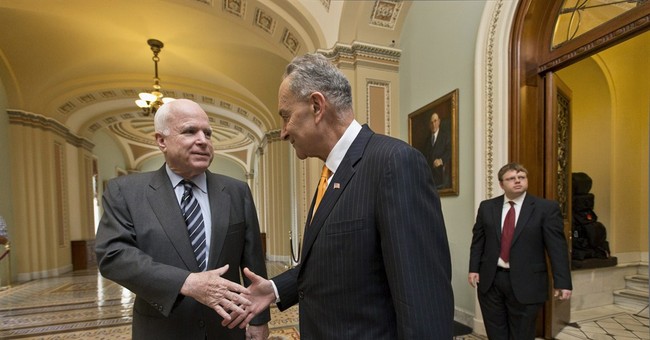 This outcome has been an inevitability ever since Monday's cloture vote, but now it's official.  The amended 'Gang of Eight' immigration framework has been adopted by the United States Senate, and is headed to the House of Representatives for consideration.  In a rare scene, Senators sat at their desks and voted one by one as the roll was called. Vice President Biden presided over the chamber.  Before the result was announced, Biden admonished the gallery against overt expressions of approval or disapproval.  They chanted "yes we can" anyway.  The final vote was 68-32 in favor, several tallies shy of the much-discussed 70 vote threshold.  The bill's supporters had expressed confidence that they'd hit that number, which they viewed as symbolically significant -- but in the final calculus, it's little more than a footnote.  The legislation needed 51 votes today, and it significantly outperformed that bare minimum.  Fourteen members of the GOP conference crossed the aisle to join lockstep Democratic support; every 'no' vote was cast by a Republican.  Because Democrats march together when the chips are down, the only real debate this week was among Republicans.  Here are dueling closing floor arguments from Marco Rubio and Jeff Sessions, advocating and opposing passage, respectively:

And so the discussion shifts to the opposite side of Capitol Hill, where House Speaker John Boehner has already vowed to ignore the Senate-passed bill.  You know my thoughts on how House Republicans ought to move forward, a process that may not even begin for some time.  Even Marco Rubio is signaling support for the creation and passage of a distinct (and presumably much improved) House bill.  The Senate saga has come to a close.  The House is an entirely separate beast.  Stay tuned.
UPDATE - Here are the Republican 'ayes:' Alexander (TN), Ayotte (NH), Chisea (NJ), Collins (ME), Corker (TN), Flake (AZ), Graham (SC), Hatch (UT), Heller (NV), Hoeven (ND), Kirk (IL), McCain (AZ), Rubio (FL), Murkowksi (AK).
UPDATE II - It begins.