Dem Senator: The State Department Really 'Screwed Up' in Benghazi 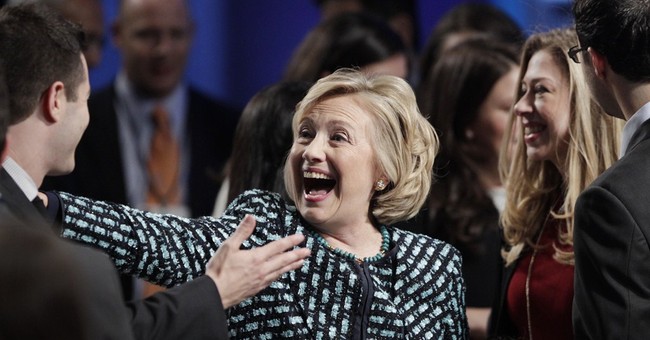 Expect Sen. Angus King, a Democrat-aligned Senator from Maine, to get a less-than-pleasant phone call from Team Hillary over this remark on CNN. Time to add Sen. King to the enemies list?

"There’s no question the State Department screwed up here," King said. “There should be accountability, in my opinion. Who did make that decision in light of all that information, and why, and I think that’s a very fair question. I’m surprised and disappointed. I know some people have been shifted around, but if accountability means anything, it means somebody paying a price for having made a disastrous decision....I haven’t seen any real accountability, and I think that’s been a failure in this whole process,” he said.


He's plainly correct about the lack of accountability. Several State Department staffers were shuffled around, but no one was fired. Prominent figures who helped mislead the public about the nature of the attacks were promoted. And 16 months after the fact, none of the the terrorists responsible for the killings have been brought to justice -- a quest that's currently "stalled," according to the Washington Post. Hillary Clinton was the Secretary of State when the Benghazi massacre took place on the highly symbolic anniversary of 9/11. She was informed in real time that the raid was a coordinated terrorist attack, yet allowed the administration to distort that fact for public consumption. Her chief of staff and assistant secretary dressed down and demoted Gregory Hicks for questioning the White House's talking points, and for cooperating with a Congressional investigation. The US' security chief in Libya testified that Clinton "absolutely" would have been aware of repeated requests for an increased security presence in the increasingly perilous city; these requests were ignored and denied. A recent bipartisan Senate Intelligence Committee report slammed the State Department's actions before and after the deadly raid. The Clinton State Department renewed its lease on its acting consulate in Benghazi just months before Amb. Stevens was assassinated. The lease included an effective waiver, allowing the facility to operate below minimum security standards. This decision was made despite two previous attempted attacks, including a bombing in July of 2012. Meanwhile, Hillary's political team has started fretting that an unhelpful narrative is beginning to take root:


Hugh Hewitt memorably stumped a Politico reporter recently by asking the simple question of what Hillary Clinton has actually accomplished. Not reputational stuff, not miles she's traveled, not name recognition metrics -- tangible accomplishments. As Americans assess Clinton's tenure as Secretary of State, they'll remember America's incoherent posture on Syria (which eventually blew up in our faces), a messy, hands-off war in Libya (which blew up in our faces), and massive tumult in Egypt -- during which America appeared to have zero influence. And there was the embarrassing Russian 'reset' gaffe, plus the far more damaging failed reset itself. There is one major Obama-era accomplishment for which Hillary does deserve considerable credit, however. Obamacare, with all its various betrayals promises, was her plan: