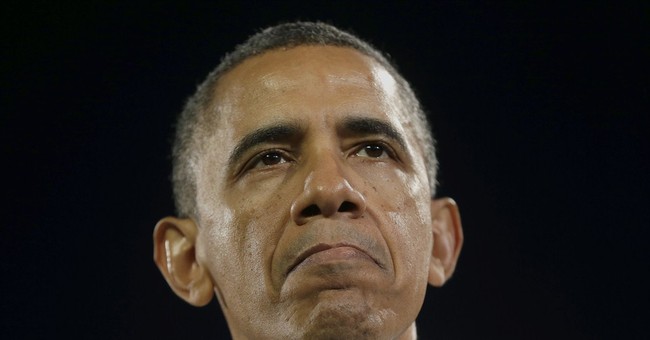 Note well, Democrats: These complaints are unrelated to Obamacare's failed roll-out, and are being driven by the vast majority of Americans covered on the employer-based market -- whom the White House has falsely claimed will not be affected by the law's changes:


Americans who already have health insurance are blaming President Barack Obama's health care overhaul for their rising premiums and deductibles, and overall 3 in 4 say the rollout of coverage for the uninsured has gone poorly. An Associated Press-GfK poll finds that health care remains politically charged going into next year's congressional elections. Keeping the refurbished HealthCare.gov website running smoothly is just one of Obama's challenges, maybe not the biggest. The poll found a striking level of unease about the law among people who have health insurance and aren't looking for any more government help. Those are the 85 percent of Americans who the White House says don't have to be worried about the president's historic push to expand coverage for the uninsured. In the survey, nearly half of those with job-based or other private coverage say their policies will be changing next year — mostly for the worse. Nearly 4 in 5 (77 percent) blame the changes on the Affordable Care Act, even though the trend toward leaner coverage predates the law's passage. Sixty-nine percent say their premiums will be going up, while 59 percent say annual deductibles or copayments are increasing....Disapproval of Obama's handling of health care topped 60 percent in the poll.


The fallout, in bar graph form: 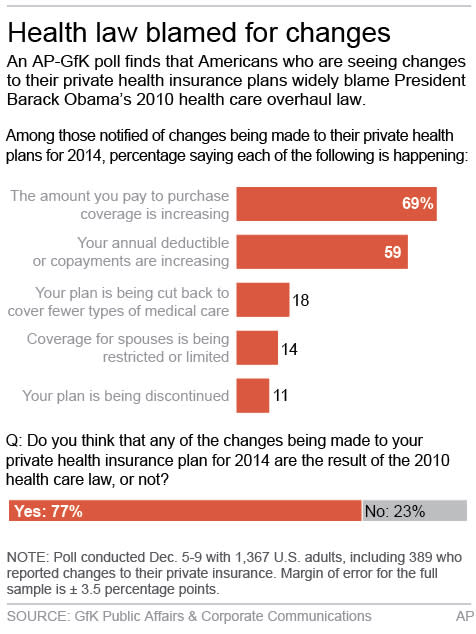 The Associated Press write-up of the poll notes that these flaws extend well beyond the public's dissatisfaction with Healthcare.gov's error-rife debut, calling into question Democrats' wishful thinking: "With the website working better and enrollments picking up, Democrats are hoping negative impressions will quickly fade in the rearview mirror." But even on that front, is the administration overselling the technological improvements? The Washington Post reports that although the government says missing 834 transaction reports have slowed to a trickle, officials are frenetically sifting through thousands of backlogged cases in which consumers' data was never transmitted to insurers through Healthcare.gov. The same issue is impacting California's state-based exchange, according to the Los Angeles Times:

Thousands of Californians have overcome long waits and website glitches to sign up for Obamacare insurance, but now enrollment snags may prevent some of them from actually having coverage starting Jan. 1. Some people who picked a health plan as far back as October through the Covered California exchange say insurers are telling them they still have no record of their enrollment. As a result, bills haven't gone out and consumers can't pay their initial premium to ensure coverage takes effect in less than three weeks.


This flaw is related to the WaPo report from last week revealing that the "vast majority" of eligibility letters destined for people who used paper applications to seek coverage have yet to be mailed. As a result, thousands of potential consumers don't even know what their options may be -- and the deadline to have selected a plan (in order to be covered on January 1st) is one week from today. Two different media accounts published late last week suggest that insurers and government officials expect America's insured population to experience a net decrease in January. A staggering failure. Furthermore, the New York Times cites insurance industry sources who allege that the administration is overstating the extent to which various tech glitches have been dealt with:


The Obama administration said Saturday that it had reduced the error rate in enrollment data sent to insurance companies under the new health care law, even as insurers said that the government’s records were still riddled with mistakes...Insurers said that they had found many discrepancies and errors and that the government was overstating the improvements in HealthCare.gov. In some instances, they said, the federal government reported that the home address for a new policyholder was outside an insurer’s service area. In other cases, a child was listed as the main subscriber — the person responsible for paying premiums — and parents were listed as dependents. In some cases, children were enrolled in a policy by the federal government and parents were left off, or vice versa. In other cases, the government mixed up the members of a family: A child or spouse was listed two or three times in the same application in late November. Such errors can have financial implications, increasing the amount of premiums that a family is required to pay. While some of the problems were discovered in the last few days, insurers said that they had previously reported many of the errors to the “help desk” at the Centers for Medicare and Medicaid Services, and that the problems remained unresolved.


I'll leave you with healthcare wonks Avik Roy and Megan McArdle weighing in on the implications of the Obama White House's most recent round of problematic "fixes" and "suggestions" for insurers, as well as this powerful Americans for Prosperity ad running in North Carolina: