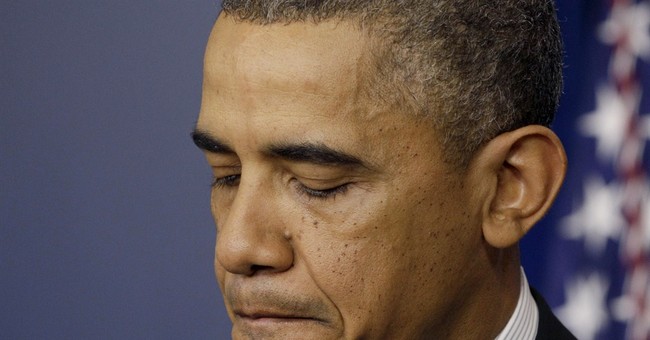 Welcome to this story, CBS News. Better late than never. Note well that the report below cites the administration's own (conservative) estimates, and highlights yet another hand-picked Obamacare "success" story that has imploded under the crushing weight of the law's failure:


"NancyCare" was a cute little sound-byte while it lasted. Now she's canceled her company's previous insurance -- which is now unaffordable thanks to the "Affordable" Care Act -- and her workers are struggling mightily to obtain quality, reasonably-priced coverage through Obamacare's exchanges. Success! Nancy's change in tune is powerful for obvious reasons (although this unraveled "success" story is worse), but the most damning element of that clip is the short montage of Jay Carney lying through his teeth about how Obamacare's dropped coverage epidemic will not affect anyone covered by their company's insurance plan. Those statements were meant to reassure the large majority of Americans that they have nothing to worry about back when dumped coverage was dominating the news cycle. But the administration's internal estimates and projections tell a different story. As we've been warning for weeks, the second wave is coming, and it's going to be worst than the first. Congressional Democrats surely know this, which is why widespread angst is setting in. Some are planning to try to distance themselves from their president and their law; others are muttering about the evil insurance companies, or whatever. It will be fascinating to see how Hill Democrats react when the website is still broken for many users at the start of next week. The Washington Post describes the technical hurdles that still await Healthcare.gov -- including, you know, building and testing major elements of it:


The online system is still marred by defects that will create havoc for insurance companies if a significantly larger volume of applicants starts to sign up in coming weeks. Among them are the error-riddled reports that insurers are receiving about who has enrolled, a problem that could be disastrous if not fixed soon...Administration officials have sought to tamp down expectations, noting that improvements will be gradual in the coming weeks and months...Even if it does work better for consumers, there are still problems — particularly the scrambled reports insurers are getting about people who have signed up for coverage through HealthCare.gov. Insurers say they are getting duplicate records and reports that misstate family relationships, such as listing a child as a spouse. In some cases, enrollment reports are disappearing. With these “orphan records,” insurers have no way of knowing whether a person is signed up for coverage, unless a new customer happens to call the company with questions. Until such errors stop, “you can’t open the floodgates” to large numbers of Americans using the Web site to sign up for coverage, said an insurance industry official who also spoke on the condition of anonymity to discuss private conversations with administration officials about how to improve the system.

The ripple effects of these flaws affect consumers, because the new coverage does not begin until they pay their first monthly insurance premiums. And without accurate information about new customers, health plans cannot send them correct bills. Beyond the troubles with enrollment forms, which have been evident since the marketplace opened on Oct. 1, insurers are anticipating problems if IT workers from the government and outside contractors cannot soon build other parts of the online system that are running behind schedule. For instance, starting in mid-December, the government and each participating insurance company are supposed to perform a monthly “reconciliation,” to make sure that each side has the same list of new customers, the benefits chosen by the consumers and the government subsidies for which they qualify. That feature of the online system, however, has not been built, according to people close to the industry and government officials. Nor can the system handle another feature, scheduled to be ready when health plans take effect on Jan. 1, in which insurers are to be paid extra government money, through a method known as “risk corridors,” if their new customers are old and require expensive medical care. “It’s not built, let alone tested,” the industry official said.


Never mind all that, Sebelius said just today (!), everything's still "definitely on track." Does she not read the Washington Post? And if you think stories like these are bad, just wait for the news accounts about people who thought they'd signed up for Obamacare, but actually aren't. What happens when some of these people have accidents or receive a terrible diagnosis? What happens is a logistical nightmare, a new bout of horrific press for the law, and more nail-biting among Democrats over numbers like this:


What a difference a month makes. A new CNN/ORC International poll indicates a dramatic turnaround in the battle for control of Congress in next year's midterm elections. Democrats a month ago held a 50%-42% advantage among registered voters in a generic ballot, which asked respondents to choose between a Democrat or Republican in their congressional district without identifying the candidates. But the Democratic lead has disappeared. A new CNN/ORC poll indicates the GOP now holds a 49%-47% edge.


I'll leave you with lefties' latest coping mechanism: Finding individual people who haven't been harmed by Obamacare. Via the crowd that shrugs off millions of cases as "anecdotes:"

UPDATE: Speaking of those "risk corridors," here come the bailouts. Rubio should push his legislation hard, and every Democrat should be challenged on it.