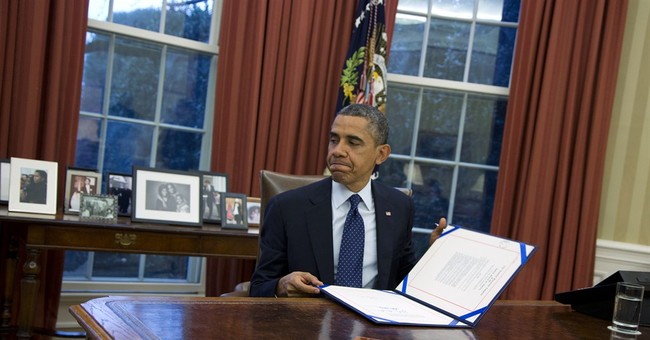 Remember, the administration is counting people who've selected plans through Healthcare.gov and placed them in virtual shopping carts as "enrollments," so this metric is both overly generous and quite misleading. To be fully enrolled, consumers need to select plans, receive confirmation from insurers, and make their first premium payment. To be covered by the first of the year, consumers must complete that end-to-end process within the next few weeks. Obamacare's website is working better on the front end -- although problems still persist -- but it's not "fixed" by any stretch. Back end flaws could create migrane-inducing backlogs on the insurer side of the enrollment equation, jamming up the entire operation. How many people are actually honest-to-goodness enrolled in Obamacare? We have no idea. We can only speculate based upon the administration's goosed numbers. So what to make of this news?


About 100,000 people signed up for health insurance through the online federal exchange last month, a roughly four-fold increase from October even as a team of U.S. government and contractor programmers was fixing the troubled Affordable Care Act website, said a person familiar with program’s progress. The preliminary November numbers reflect individuals who successfully selected a plan. The administration expects that most consumers will sign up early next year as the enrollment period nears its March 31 close, said the person who asked for anonymity because the final numbers were still being calculated.


October's number was a pathetic 27,000 -- so breaking into six figures in November obviously represents a relative improvement. But it's equally obvious that this figure is objectively terrible. The administration hoped to have 800,000 Americans fully enrolled in Obamacare by the end of November. If Bloomberg's scoop is correct, Team Obama is less than 20 percent of where they need to be by now, at least through the federal site. They've achieved roughly three percent of their overall 2014 enrollment projection of seven million. Also missing from the official numbers is a sense of the all-important demographic composition of the risk pool. Early indicators on that front have been worrisome. Despite the government's braggadocio about the new and improved Healthcare.gov, White House officials have quietly decided not to launch a major enrollment PR campaign -- a sure sign that the system's technological advances are tenuous. Indeed, Sebelius and friends are recommending that Americans attempt to sign up during off-peak hours, an odd request if the system is "90 percent" repaired. Officials are also wavering on their own assertions, such as claims that the site can handle 50,000 concurrent users, resulting in a seamless experience for 80 percent of consumers. Which brings us back to those pesky back end troubles. John Dickerson describes the backlog problem I referenced above:


Insurance company sources tell the National Journal that there is still about a 5 percent error rate in the information the site submits to insurance companies on behalf of those picking a new insurance plan. If the site is fixed but this problem is not, the problem could get worse. People would sign on, fill out the forms, and insurance companies would be flooded with bad data. That would delay insurance companies sending out bills, which is the necessary step required for a person to actually have insurance by Jan. 1. For those in the individual market who have coverage now, if they don’t sign up by that deadline, they will be exposed.


Team O has made upgrading average people's online experience a top priority, which makes sense politically. If people are still banging their heads up against relentless error messages into mid-December, the headlines will be disastrous. But even if the front end mess is tidied up, the subsequent crush of new applications threatens to overwhelm insurance companies with corrupted data -- which will, in turn, prevent the enrollment process from moving forward properly. In other words, improved site capacity and fewer people stuck in 404 purgatory are positive signs for Obamacare, but that progress could easily be stunted or reversed by complex back end failures. These issues will be less visible to average people at first, but the ship still sinks if there are leaks in key compartments. People are either insured, or they're not. Obama may spare himself some political pain in the short term by focusing on cosmetic fixes, but what happens when newly uninsured people (thanks to Obamacare) aren't covered in time for the new year and suffer health emergencies? I'll leave you with this. Ta-da:

http://t.co/J3UFQVEjIJ "has a lot of visitors right now," offering option for users to leave email, come back later pic.twitter.com/QT9BOEepFt

UPDATE - One more point of perspective: As of early November, five million people had lost their coverage under Obamacare -- a number that has surely grown. Based on the data above, roughly 130,000 have gained coverage through Healthcare.gov. Disaster.