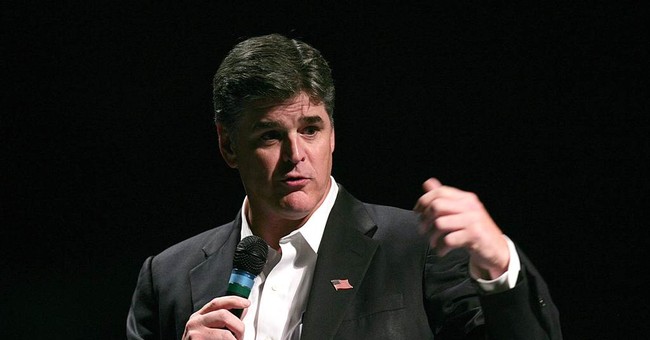 In his alternate-reality press conference on Monday, President Obama told millions of frustrated Americans that there were ways to enroll in his healthcare law other than through its hopelessly broken website. Two alternatives, the president explained, would be to call Obamacare's 1-800 number, or visit a "navigator" in person. It turns out that much like the corrupted website, these options aren't viable either. Sean Hannity decided to take the president's advice and call the number in order to get a sense of how the system is -- or in this case, is not -- working. After four attempts, Hannity finally connected with a live operator. He disclosed that she was on the radio, she gave him permission to proceed, then he asked her a series of questions. Her answers painted a picture of widespread customer dissatisfaction:


HANNITY: They’re really telling you to tell us to check back in on the website in off-hours. Does that mean that I should go on at like three in the morning?

OPERATOR: It was saying early in the morning and late at night, but some people say they do that and still can’t get in.

HANNITY: So people are reporting to you the real deal?

OPERATOR: Yes sir, they are.

HANNITY: Have you ever got anybody that really likes it yet?

OPERATOR: Umm, no, not really.


The very next day, the woman was summarily fired. Hannity invited her back on his radio show to share her story, and ended up announcing that he would voluntarily donate the equivalent of one year's salary to her family, plus help her find a new job:

A few reactions to all of this:


(1) Hats off to Sean for being a stand-up guy. He played it by the book, asked her basic questions, and owed her nothing after she got into hot water. But because he's a kind person, he recognized that his act of journalism cost an innocent woman her job, and bent over backwards to make her whole -- and then some. Bravo.

(2) This entire episode reflects terribly on the Obamacare bureaucracy, from top to bottom: The president is pitching a 1-800 number that cannot actually sign people up for coverage, despite his misleading assurances. A total embarrassment. The only person (to my knowledge) that has been fired in connection with the Obamacare failure is a $25k-per-year "navigator" who committed the inexpiable sin of telling the truth, and embarrassing her political overlords. Meanwhile, Kathleen Sebelius -- the cabinet secretary who's overseen this giant mess, and who lied her ass off about its progress -- is safely ensconced in her position. She enjoys the "full confidence" of the president. Little people are expendable; inept higher-ups are bulletproof, if only to deny Republicans a fleeting political "win." This is what happens when you have an unqualified, out-of-his-depth, highly ideological speech-giver running the executive branch. Also, Obamacare's middle-level managers huddled after this incident went viral, and decided to can this employee. What optics. Terrific management all around.

(3) The only conceivable lefty excuses for this fiasco are as follows: Blame Hannity for asking questions (which is the media's job). Journalists have been unable to wring any real answers out of hyper-secretive "official" Obamacare spokespeople, so Sean practiced a little journalism, and exposed the inconvenient truth. Or, attack the navigator. I happen to believe that this was a hard-working woman who was inadequately trained. Indeed, the "navigator" training process was short-circuited a few weeks ago because the entire system was lagging so far behind schedule. It would follow that corners were cut. Bad PR is a consequence of incompetence. We do know that the navigators have been drilled to be as pleasant and accommodating as possible with callers, and this woman applied that principle to Hannity, obviously not thinking twice about assenting to being on the radio. Her critics may choose to smear her as stupid (shouldn't she have known she wasn't authorized to speak to the media?), or a liar (she must have been trained not to agree to media interviews, and she's covering her ass). Regardless of which of these explanations is true, I ask: Why should Americans feel confident handing over their sensitive financial and health records to Obamacare helpers who are some combination of poorly trained, lacking in common sense, and untruthful?