Whispers: Might the House GOP Adjourn and Leave Town After Passing 'Final Offer'? 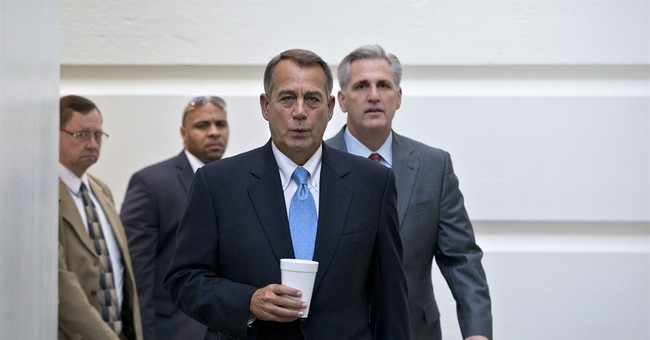 Lurking at the very bottom of Conn's summary of the House's (final?) counter-offer to the Senate is this intriguing nugget:


If the bill passes, House Republicans may adjourn leaving Senate Democrats and President Obama with a final take-it-or-leave-it offer.


First, "if the bill passes" is an open question, though it's sounding like House Republicans have mostly rallied around the Speaker's plan. They opened their meeting this morning by singing "Amazing Grace," then telegraphed their next volley. Whether they have the votes to pass it without any Democratic support -- Pelosi will likely whip hard against it -- remains to be seen. But if it passes, might Boehner gavel the House closed, with members leaving town? Ramesh Ponnuru hears rumors:

Hearing House may pass its bill and then skip town.


This would be a highly risky take-it-or-leave-it strategy. The GOP would argue that they gave Senate Democrats everything they asked for in their latest deal, but added a delay of a job killing tax that 79 Senators have already voted to repeal altogether, as well as a somewhat stripped-down Vitter Amendment. This would force members of Congress, but not staffers, to forego the president's special subsidy carve-out. The bottom-line message: "We've agreed to Harry Reid's plan, plus a few small additions that the American people support. We've bent over backwards to accommodate the other side. We've done our jobs. And we're outta here." That...might work. But it also might add to the (largely unfair) perception that Republicans are the obstinate, unflinching actors in this crisis. Harry Reid is likely to say "stuff it" to the House-passed bill -- if it passes. That's been his consistent position on almost everything, no matter how reasonable. If we hit the technical default wall with Republicans effectively AWOL, I'm not so sure those optics would work well during the ensuing, intense blame-game. Especially since the drumbeat GOP critique of Democrats over the last few weeks has been that Obama & Co are unwilling to negotiate. At the moment, nothing is certain. Votes and coalitions are fluid. And the clock is ticking. Stay tuned.


UPDATE - A concession from Democrats? A tax delay that would have benefited Big Labor might be gone on the Senate side:

breaking from Senate GOP source: "the reinsurance tax is OUT of what’s being negotiated between Reid & McConnell..."


UPDATE II -The GOP may be (surprise!) divided on the "leave town" gambit:

Tom Cole says some members suggested House leave after vote but hopes they won't. "We don't want a take it or leave it" approach.


UPDATE III - White House rejects the deal. Does Boehner even have the votes?

So WaPo reporting the Boehner proposal might not have been able to get 217 votes. Wowza.


GOP leadership may be re-writing their counter-deal already, under pressure from conservatives. Shades of the "Plan B" fiscal cliff fiasco, which eventually resulted in a worse outcome for conservatives.


UPDATE IV - Reid angrily rejects the House GOP plan (such as it exists), even though it's not that different from his own. Chuck Todd: