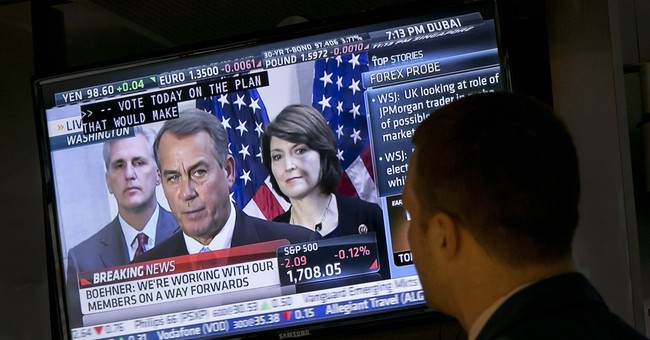 Let's begin with a complication: The House Republicans' counter-offer is still in flux, with conservative sweeteners (regarded as poison pills by Democrats) in the mix to be tacked on before a vote. Changes, added demands, and recalcitrant members could alter the landscape considerably over the next few hours. All that being said, the GOP's basic framework is awfully close to Reid's plan. And yet:

Reid went thermo-nuclear on the potential House proposal -- sight unseen -- because it reportedly differs slightly from his preferred route. He's busy negotiating with Senate Republicans, who, last I checked, are in the minority. House Republicans are the majority in their chamber, so not razing their ideas to the ground every two seconds might be productive conduct for a leader who's actually interested in a good-faith resolution to the current crises. Harry Reid's behavior is making an unprecedented technical default likelier, and is ensuring that the government shutdown he helped engineer will carry on. His antics even surprised center-left MSM journos like MSNBC host Chuck Todd:

No one expects Boehner's deal to get thru Senate; folks are missing that he is accepting Senate structure; not a small deal

House Republicans are working on their own plan to end the government shutdown and, at least in its current form, it's pretty reasonable...on a policy level, there's really very little difference between this and the Senate deal. Aside from deficit reduction, there's no obvious justification for the medical device tax. It doesn't make the Affordable Care Act work better. It will destroy some jobs and drive some manufacturers overseas. All things being equal in an economy as weak as ours, it's probably better not to have it.


Klein makes clear that he's still no fan of these Republican hostage-takers, etc., but his point still stands. Other journalists are also noticing the White House's (remember them) dichotomous treatment of yet-to-be-seen proposals:


Meanwhile, Phil Klein (no relation) relays some dismaying news about the deals' beefed-up "eligibility verification" provisions, which were in the original law to begin with before Obama waived them:


Instead of making sure that proper income verification procedures are in place before the federal government gives out any subsidies, the version currently being discussed would simply ask Secretary of Health and Human Services Kathleen Sebelius to certify that proper measures are in place. At that point, the government can start releasing subsidies. Assuming that Sebelius makes that certification decision without breaking a sweat, the program will be subject to an inspector general audit. But as with previous independent reports -- such as the one finding that Sebelius broke the law governing political activity by cabinet employees -- even an embarrassing audit is likely to cause a few days of bad press (perhaps a bit more in the conservative media) and then she'll just move on.


Yesterday I asked whether this particular item would have any teeth. The answer? Not really. Klein is exactly correct. Sebelius won't be fired for presiding over the Obamacare trainwreck, so she certainly won't feel any compunction about lying about verification readiness, even if she eventually gets slapped down by an investigator. It's very, very hard to get fired for screwing up in this administration. Here's the reality of what'll go down...assuming a deal is finally reached (which, again, isn't a sure bet):

Whatever deal ends all this will infuriate much of the GOP base, which is what happens when expectations are managed poorly.

So, GOP could piss of its base & avg ppl w/ prolonged gambit & inevitable climb-down -- but could still fare okay in '14. Politics = weird.


The basis for my 2014 elections point? We're more than a year away from election day, plus these polls. I'll leave you with this image of the massive OFA anti-Tea Party "rally" on Capitol Hill. Based on the one-idiot-with-a-confederate-flag standard, I ask, why do all Democrats hate mentally-challenged people? 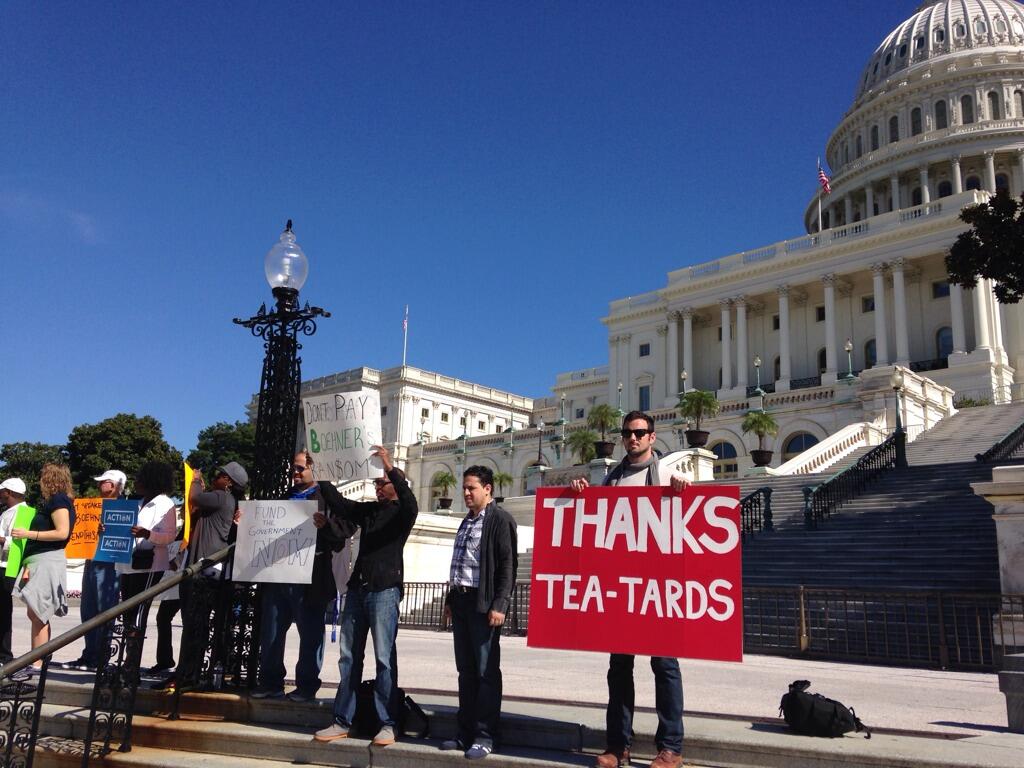 ...but cautions that things are still fluid, hedging on prediction. Still, thinks TP members hard-pressed to vote against Vitter amdt.