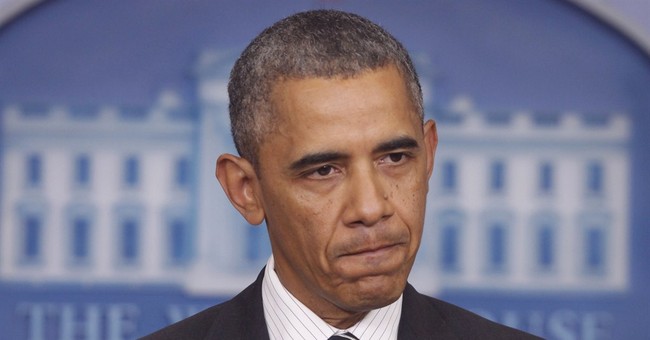 Dilemma: There's so much fresh, terrible news about Obamacare to report that I'm not sure how to squeeze it all into a single post without it getting too unwieldy. Solution: Serve up one post about the implementation trainwreck here, followed by a piece on premium shock, layoffs, and other failures tomorrow morning. Sound good? Okay, let's go. Up first, the law's administrators are resorting to an anachronism, paper applications, in a desperate attempt to enroll consumers. Obamacare's exchanges were breathlessly billed as -- ahem, "simple and user-friendly" -- Travelocity-style websites for healthcare. Amid the endless shinola-storm of glitches and technical meltdowns, here we stand:

The dead-tree version of health insurance enrollment is turning out to be surprisingly popular. Unable to use new government insurance Web sites that have been plagued by technological problems, those tasked with helping the uninsured sign up for health coverage are bypassing the sites altogether, relying instead on old-fashioned paper applications. It is a slow and labor-intensive substitute for what was supposed to be a snappy online application, similar to Amazon or Travelocity. But faced with a flood of people eager to get health benefits for the first time, what had been considered Plan B has become the plan — at least until the sites are operating more reliably, according to consumer guides and community groups. It is one way the frustrating, persistent glitches on some state Web sites as well as the main federal portal serving 36 states have had a ripple effect around the country.


Er, the only reason old-fashioned paper is "surprisingly popular" is because the entire web system, which the government had three-plus years to prepare, is hopelessly broken. The Post story goes on to reveal that those who "sign up" the old-school way...aren't actually enrolled. I'll let Allahpundit explain why:


Solution” suggests that people are now being successfully enrolled via paper applications. Not so. Turns out that the info on those applications needs to be input into the same wheezing, error-riddled computer system that’s forced website users into using paper in the first place. The “solution,” in other words, is simply to create a paper backlog that will need to be manually entered into the ObamaCare database by the insurance companies themselves if/when the system ever becomes stable enough to let them do that.


We noted over the weekend that current estimates suggest that the entire federal exchange only managed to enroll about 5,000 Americans over its first week. We're relying on expert guesses and cobbled-together figures because the Obama administration has refused to release the actual data. And the (humiliating) leaked data apparently doesn't account for thousands of glitchy duplications and attempted cancellations. The Miami Herald half-jokes that tracking down successful enrollees has become the healthcare equivalent of finding Sasquatch:


Will the Floridians who have enrolled for Obamacare please stand up? Nearly two weeks after the federal government launched the online Health Insurance Marketplace at HealthCare.gov, individuals who have successfully used the choked-up website to enroll for a subsidized health insurance plan have reached a status akin to urban legend: Everyone has heard of them, but very few people have actually met one. The Miami Herald searched high and low for individuals who completed enrollment for a subsidized health plan through the marketplace, also called an exchange, launched by the federal government on Oct. 1 in 36 states, including Florida...As of Friday, however, only a smattering of success stories had emerged in news reports.


Astoundingly, some state exchanges have fared even worse. As you follow those links, bear in mind that the states that chose to establish their own non-federal exchanges are led by Democrats. In other words, they were most prepared and most enthusiastic about making Obamacare work, yet they're falling flat on their faces. For its part, the administration has known this meltdown was hurtling down the tracks for months, a fact that the New York Times has apparently just discovered. Now tech and industry experts are worried that we've only seen the beginning of the snafus, with more catastrophic problems waiting in the virtual wings:


Evidence is emerging from the insurance industry and elsewhere...that the exchange also has flaws that show up further along in the process — as consumers try to check whether they qualify for federal subsidies and as insurers try to find out who has enrolled...Compounding the confusion, these electronic enrollment files are missing a critical element that they were built to include: a time stamp that would let a health plan track whether a consumer’s last step on the site was to actually sign up. Insurers are uncertain of the cause of the flaws, with some speculating that the exchange cannot consolidate consumers’ moves through the Web site as they shop for and ultimately choose a health plan. Others say the problem could be unrelated software errors...Beginning in December, health officials intend to run a monthly comparison of the federal list of enrollees against the insurers’ lists. However, one insurance industry official said that the computer system needed to perform that comparison has not been tested.


Has not been tested. I'll leave you with Obamacare's top wonk cheerleader dumping all over the Obamacare rollout on MSNBC:


Even Ezra Klein can't dress this thing up as anything other than a "terrible disaster." To wish-cast this mess away would take a true hack. I think we've found our man.