Minor Detail: What Would a Government 'Shutdown' Actually Do? 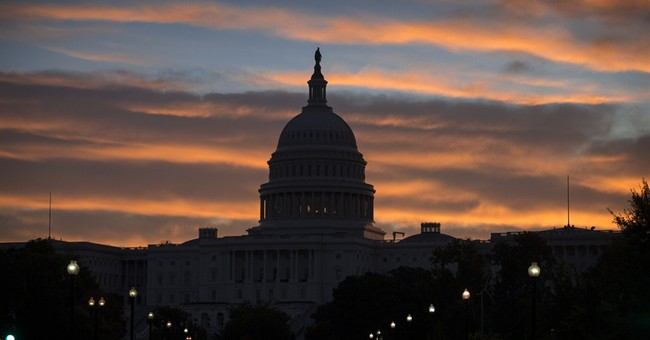 I call it a "minor detail" only because we're way past the points of arguing facts at this point. What matters is the media's breathless reporting of Congress' game of budgetary ping-pong, and public perception. Democrats are calling names, obstructing compromise, and winning. But what would an increasingly-likely partial federal shutdown look like? USA Today offers a handy -- and refreshingly straightforward -- guide to answering 'shutdown' FAQ. A few highlights:


32. Would a shutdown put the brakes on implementing the Affordable Care Act, or "Obamacare?" No. The state-run exchanges for the uninsured would open as scheduled Tuesday. "The marketplaces will be open on Tuesday, no matter what, even if there is a government shutdown," President Obama said Friday. 33. Why not? Like Social Security or Medicaid, Obamacare is a permanent entitlement that isn't subject to annual funding by Congress. "Many of the core parts of the health care law are funded through mandatory appropriations and wouldn't be affected," Gary Cohen, the Health and Human Services Department official overseeing the health care rollout, said last week. 34. Would seniors continue to get Social Security benefits? Yes. Social Security is a mandatory spending program, and the people who send those checks would continue to work under a legal doctrine called "necessary implication." 37. Would the government continue to pay unemployment benefits? Yes. The Employment and Training Administration "will continue to provide essential functions, as occurred during the shutdown of 1995," according to the Department of Labor contingency plan. 38. Will I be able to get food stamps? Yes. The Supplemental Nutrition Assistance Program (SNAP) is funded through the Recovery Act and from funds that don't expire for another year, the U.S. Department of Agriculture says. 40. And the federal school lunch program? Schools are reimbursed for these costs on a monthly basis and are allowed to carry over funds from the previous fiscal year. The USDA expects most schools will be able to continue providing meals through October.


In other words, many of the Left's go-to scare tactics are specious. Seniors won't be denied Social Security checks, and indigent Americans won't go hungry. The Pentagon has said that active duty personnel may not receive their pay on time if a potential shutdown dragged on for weeks, but the House unanimously passed a fallback bill that would fully fund the military in the event of a shutdown. (Harry Reid won't commit to holding a vote on that item -- update: passed by unanimous consent). Earlier this morning, John Boehner used a rare floor speech to ask why the Democrat-held Senate took the weekend off if they were so worried about a shutdown:

That's actually a decent narrative from Boehner, but I suspect events are moving too quickly for it to gain much traction. The answer to his question, of course, is that Harry Reid & Co. would love a shutdown. They see no reason to budge, Republicans are fractured, and the politics cut in their favor. Hence:

Reid, unambiguous: "We're not going to anything other than wait for them to pass our CR, because otherwise, government's going to shut down"

It should be noted that Democrats are arguing that their "compromise" has already occurred, in the form of agreeing to the GOP's preferred spending levels in the CR. House Republicans are huddling and trying to figure out what comes next. I expect at least one more House-passed CR with anti-Obamacare provisions before midnight, followed by another rejection from Harry Reid's crew. After that, things get hairy. It's going to be a long night.