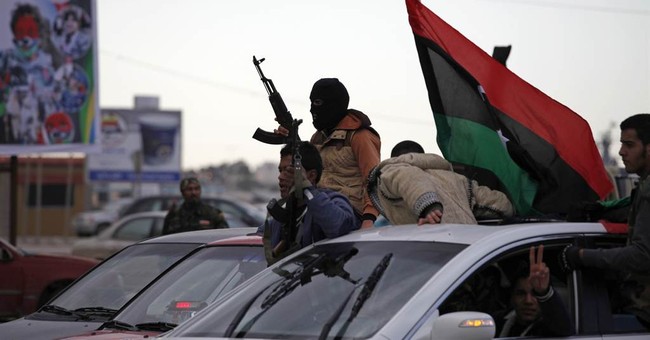 Is it possible for the United States to look any weaker in the eyes of the world than it has throughout the Syria spectacle?  If Fox News' sources are accurate, it sure is.  When it rains, it pours:

Highly sensitive U.S. military equipment stored in Libya was stolen over the summer by groups likely aligned and working with terrorist organizations, State Department sources told Fox News -- in raids that contributed to the decision to pull Special Forces personnel from the country.  The stolen equipment had been used by U.S. Special Forces stationed in the country. Lost in the raids in late July and early August were dozens of M4 rifles, night-vision technology and lasers used as aiming devices that are mounted on guns and can only be seen with night-vision equipment.  "This stuff is how we win wars. The enemy doesn't have that," one source said.  The overnight raids happened at a military training camp run by American Special Forces on the outskirts of Tripoli, in the weeks before the team was pulled from the country in August.

Do note: This fiasco transpired in a series of raids that took place this past summer; these were separate and discrete events from the 9/11/12 Benghazi attacks, during which dangerous surface-to-air missiles were allegedly seized by terrorists.  Additional details on the more recent incidents:

"The loss of this military equipment is what pulled the plug on the U.S. operation," one source with direct knowledge of the events told Fox News. "No one at the State Department wanted to deal with the situation if any more went wrong, so State pulled its support for the training program and then began to try and get the team moved out of the country."  ... Located just outside of Tripoli, the camp was supposed to be secured each night by Libyan forces. But on two occasions, the camp was attacked and raided by either militia members or groups affiliated with terrorist organizations.  The training and the stolen equipment was provided by American forces and thus paid for by U.S. taxpayer dollars.  The raids and stolen equipment quickly caused a rift among U.S. Special Forces, Libyan military leaders and ultimately the U.S. State Department.  "They didn't want anything to go wrong and they didn't want to take the blame. Sensitive items were taken," one source said. "Bad guys can now shoot people at night with no signature."

Lovely.  Rather than correcting the problem and taking the steps to secure these weapons, the State Department -- terrified as ever of bad publicity and political blowback -- just pulled the plug.  America ran away, withdrawing the Special Forces team assigned to nabbing the Benghazi perpetrators in the process.  We questioned the timing of that development when it was first revealed a few weeks ago, and now we have a credible explanation for why it happened.  Libya is a failed state. Two years ago, our president declared that "Ghaddafi must go," then launched a war to help the "moderate" Libyan rebels, spurning Congressional authorization -- even after his own Office of Legal Counsel advised him that the law demanded it.  Well, Ghaddafi is gone, and chaos has filled the vacuum.  America -- having "led from behind" in helping to depose the dictator -- has been attacked and embarrassed in the country ever since.  Serious question: What did that war accomplish?  And now we're kinda, sorta threatening to engage another regional conflict, taking the side of "moderate" rebels yet again?  Assad is a greater threat to US interests that Ghaddafi was (especially after he renounced and gave up his WMD program, following a genuine show of US might).  But based on the last two weeks, it's unclear if our leadership has the will or the competence to positively influence the horrific situation in Syria at all.  That's why Congressional whip counts and public support lie in shambles.  Much like the US position in Libya.