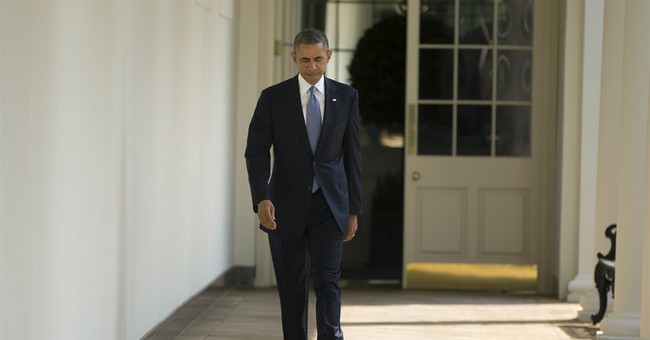 Honestly, I'm not sure if I can improve on this:


So is he! RT@allahpundit: Honestly curious now to see what O has to say tonight


Does anyone believe the president had the foggiest idea what he'll say tonight as recently as mid-afternoon?  He's blown through three different Syria policies -- that we know of -- in the last 48 hours.  And because he promised America a speech, a speech we shall receive.  How will he frame his remarks?  Will they be tailored primarily for a domestic political audience, or for America's adversaries, who have been running rings around him while giggling?  My guess is that he'll issue a deadline and an ultimatum, while talking a lot about how US pressure created an opening for diplomacy to work.  Everyone wins!  Assad gets off with a sternly-worded letter, Putin thoroughly routs the US on the world stage, and Obama stops his political bleeding at home.  Let's update the farcical "smart power" parade:  (1) Syria's regime says it suddenly wants to sign the international anti-chemical weapons treaty, and declare its arsenal...which they've "declared" several times in recent months.  (2) The Obama administration is trying to pretend that John Kerry's screw-up yesterday is what they'd been planning all along.  The shamelessness of this lie is astounding, given their own quotes from yesterday.  (3) Putin, having exploited Kerry's turnover, has again embarrassed the US, this time by derailing his own proposal at the UN.  He's demanding that the US stand down on even the threat of military force, and will no doubt push for a watered-down, toothless UN resolution.  In case you're curious, action at Turtle Bay has been...postponed.  How is the Left is reacting to all of this?  With a hodgepodge of denial and wish-casting:


If Syria actually declares its stockpiles and signs the treaty, would make it *really* hard for them to use weapons again.

I can't believe the White House's strategy on Syria is working out this well. I doubt they can, either.


Does Hayes recall that Assad has already used chemical weapons on several occasions, then adamantly denied doing so, with PR assists from Moscow?  But I'm sure signing a piece of paper will make everything different.  It's not like Russia has a Security Council veto or anything, right?  As for Klein, I'm not sure what else to say.  The Capitol Hill whip count is as ugly as ever -- including in the Senate -- so The One wants the vote delayed.  It will thus be delayed. How Obama will address the Congressional side of all this tonight is anyone's guess, but it will probably involve many references to diplomacy and deliberation.  In the meantime, as we await (and watch) the president's speech, be sure to read today's must-read pieces:  For the third time, here's Julia Ioffe in the New Republic explaining how Obama "got played by Putin and Assad," plus the UK Telegraph's Charles Crawford recapping "the worst day in Western diplomatic history." We'll be back with quick analysis after this thing is in the books.  Parting thought: Rand Paul was planning to deliver response to Obama's case for bombing Syria (which was the original point of this speech). How can Paul respond to an unpredictable address that's been substantially re-written several times? The fun begins at 9pm ET.


UPDATE - One more: Max Boot shreds the Assad/Putin/Kerry plan.  And by the way, our "allies" in the Syrian opposition are vowing to join forces with Al Qaeda -- one of the many reasons these numbers look the way they do.

UPDATE II - As far as predictions go, I think Peggy Noonan is spot on, all the way down to the inevitable shameless spin.