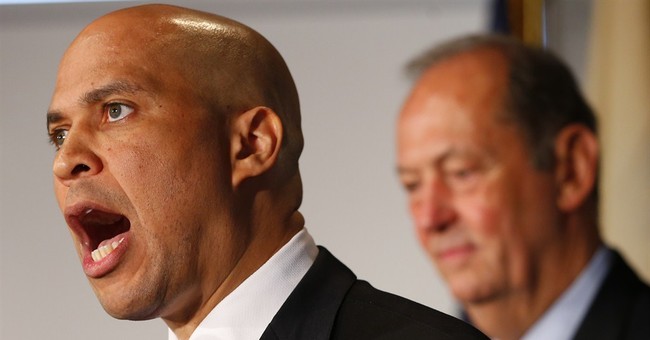 Today's US Senate primary election in New Jersey was precipitated by Sen. Frank Lautenberg's death in June, and Gov. Chris Christie's executive decision to call both a primary and general election before the already-scheduled November contest -- a move that drew hackles from both the Left and Right.  Part of Christie's (politically shrewd) rationale was that voters, not party insiders, should have the chance to select the various nominees for a major statewide election.  New Jerseyans will have their say today, and neither major party's race is likely to be a nail-biter:

Prepare for Booker vs. Lonegan.  At least that is the finding Wednesday of the latest Quinnipiac University Poll, which foresees Newark Mayor Cory Booker and former Bogota Mayor Steve Lonegan squaring off in the U.S. Senate race.  According to the poll, with a primary looming on Aug. 13, Booker leads his three Democratic opponents with 54 percent. Meanwhile, Lonegan has a 74-10 lead over his challenger, Dr. Alieta Eck, in the GOP primary...Regarding the three other Democratic primary candidates, U.S. Rep. Frank Pallone has 17 percent of likely voters, U.S. Rep. Rush Holt has 15 percent, and Assembly Speaker Sheila Oliver has 5 percent.  Only 8 percent of voters remain undecided.

The same poll projects a Booker cake walk in October's special general election, though feisty conservative Steve Lonegan will throw everything he's got at Newark's celebrified Mayor in an attempt to shake-up the race.   Both campaigns have been dogged by controversies in recent days.  Lonegan, who served three terms as the mayor of heavily-Democratic Bogota before falling to Christie in the 2009 gubernatorial primary, will run an unapologetically conservative campaign and will seek to highlight the chasm separating Cory Booker's reputation and his actual results.  Even the New York Times has taken notice of this disconnect:

Cory Booker’s promise — captured in two books, two documentaries and frequent television appearances — was to save a city that had been hemorrhaging residents, industry and hope since the riots that ripped it apart 45 years ago. But a growing number of Newarkers complain that he has proved to be a better marketer than mayor, who shines in the spotlight but shows little interest in the less-glamorous work of what it takes to run a city.

Jim Geraghty has more on Booker's "wild hype-to-accomplishment ratio," including several apparent ethical lapses.  Meanwhile, State Democrats will cast Lonegan as an extreme right-winger, which is has been their (largely successful) playbook dating back decades.  Republicans haven't won a US Senate election in New Jersey since Richard Nixon was president.  If he emerges as the GOP nominee as expected this evening, can Lonegan change the game?  I'll leave you with an anti-Booker expose produced by a conservative SuperPAC, and a promise to the people of his city that Booker has already broken: