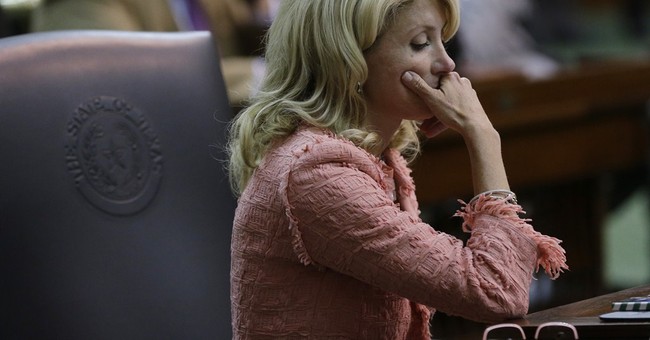 The Democratic star du jour was asked this week to explain the difference between the late-term abortions she fought to keep legal in Texas and the illegal killings by Philadelphia abortion doctor Kermit Gosnell. “I don’t know what happened in the Gosnell case,” she told the Weekly Standard’s John McCormack, who cornered her after her National Press Club speech on Monday.  This is incredible. After all, Davis is the state senator who held an 11-hour filibuster to fight legislation drafted in response to the abuses at Gosnell’s clinic. A passing knowledge of the case seems like basic due diligence. She went on: “But I do know that [Gosnell] happened in an ambulatory surgical center. And in Texas changing our clinics to that standard obviously isn’t going to make a difference.” It takes real skill to pack so many falsehoods into so few words. According to the Gosnell grand jury report, “The abhorrent conditions and practices inside Gosnell’s clinic [were] directly attributable to the Pennsylvania Health Department’s refusal to treat abortion clinics as ambulatory surgical facilities.” In December 2011, the governor of Pennsylvania signed a law inspired by the Gosnell tragedy requiring exactly that. This legislation was opposed by the pro-abortion rights forces in Pennsylvania, but had the full-throated support of Democratic state Rep. Margo Davidson, whose 22-year-old cousin died from a botched abortion at Gosnell’s clinic.

Davis won endless media plaudits for standing and opposing a piece of legislation drawn up as a response to a case she admits she doesn't know much about, and what she thinks she knows about it is factually false.  The press was too busy asking about Davis' cute pink shoes and other superficialities to notice (or care) that she's clueless on the underlying issue itself.  And how does Sen. Davis explain the undeniable trend that women are more likely than men to support the abortion restrictions she loudly opposes, purportedly on behalf of women?

At one point in his interview, McCormack asked Davis what she made of the fact a majority of women support late-term abortion bans. Davis told him, “I…think that a lot of people don’t really understand the landscape of what’s happening in that arena today and what an incredibly small percentage of procedures take place there.” Actually, the people who “don’t really understand” the issue are the Democratic ladies crusading against laws the majority of the country supports.  Despite frequently mocking anti-abortion activists as anti-science know-nothings, abortion rights absolutists are the ones who play fast and loose with the facts of abortion. Because they are so rarely asked to defend their positions, Davis and her ilk apparently don’t feel the need to be informed.  Follow-up questions to their strange and often empirically false statements are almost nonexistent, while offensive or misinformed comments from GOP back benchers are greeted with full-scale media hysteria.

Why aren't more reporters willing to ask these basic questions of "pro-choice" Democrats?  The abortion lobby is far out of the mainstream on these issues, yet they're routinely permitted to fall back on gauzy, inoffensive rhetoric of "women's health," and are rarely challenged.  Live Action, a pro-life organization, held a "March on the Media" event yesterday to apply pressure on the press, demanding that they at least attempt even-handedness when covering the topic.  Americans are split down the middle on abortion -- with a pro-life trend -- and overwhelmingly oppose second and third-trimester abortions.  The "choice" community assails the majority position as a misogynistic attack on women's health.  What does that mean, specifically?  And perhaps more to the point, do they have any idea what their own talking points mean?  If Wendy Davis is any indication, they might now.

Former MSNBC Producer Explains Why She Left in Blistering Letter
Leah Barkoukis
One Democrat's Hypocrisy Soars to New Heights... All Over National Parks
Beth Baumann
With Police Being Attacked and Under Threat of Being Defunded, July Gun Sales Were One for the Record Books
Matt Vespa
Karen Bass Previously Praised the Church of Scientology and Now It's Biting Her In the Butt
Beth Baumann
Why President Trump Is Calling for a Revote In a Primary Election
Beth Baumann
Pro-Police Groups Paint Nation's First 'Back the Blue' Street Mural in Tampa
Madeline Peltzer
CARTOONS | Tom Stiglich
View Cartoon
Most Popular