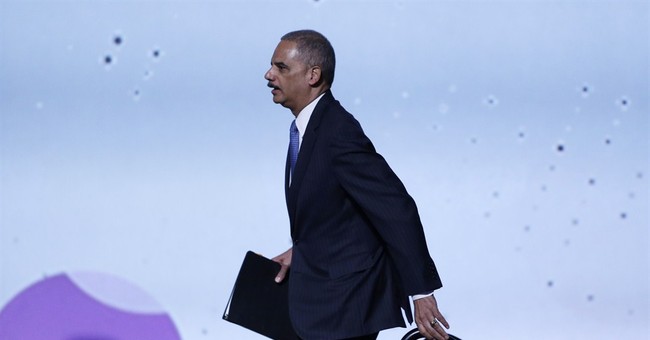 These "phony" scandals keep rudely refusing to go away.  New findings from the House Judiciary Committee appear to stop short of accusing the Attorney General of bona fide perjury, but make clear that they view his testimony as grossly misleading.  Via National Review:

The House Judiciary Committee has just released a report declaring that Attorney General Eric Holder misled House members during sworn testimony about the Justice Department’s investigation of Fox News reporter James Rosen. “The Committee finds that Mr. Holder’s sworn testimony in the Rosen matter was deceptive and misleading,” the report reads. They call for a shakeup at Justice: “No amount of law-making can restore credibility and professionalism to the Justice Department in the wake of these revelations. The only way to achieve this goal is through an improvement in the quality of leadership at the Justice Department.” The Republicans on the committee accuse Holder’s Justice Department of “tarnishing a journalist as a suspect in a national security investigation,” referring to a DOJ affidavit signed by holder naming Fox News’s Rosen as a “possible co-conspirator” in its prosecution of State Department leaker Stephen Kim.

Good luck with those calls for a "shake up" at DOJ, House Republicans.  The president and his Attorney General have made it abundantly clear that they couldn't care less about the opinion of Congress.  In fact, in response to a reporter's question about whether he has the authority to unilaterally revise Obamacare, the president said, "ultimately, I’m not concerned about [members'] opinions — very few of them, by the way, are lawyers, much less constitutional lawyers."  Caught up in a self-inflicted firestorm over his department's treatment of the free press, Holder investigated himself, imposed new ostensible limits on himself, and told everyone else to move on.  After a politically-charged (but correct) verdict came down in a Florida courthouse last month, Holder's DOJ went through the motions of investigating the alleged crime further, for the sole apparent purpose of satisfying a political constituency.  And in the wake of the Supreme Court decision invalidating an anachronistic segment of the Voting Rights Act, Holder is attempting an end-run around the ruling through a new action against the state of Texas.  The idea that a House panel's slap on the wrist will force Holder's hand is laughable.  He operates with impunity, as any Moses-like"Chief Lawgiver" would.  That doesn't change the fact that Holder clearly misled the United States Congress with statements made under oath, pertaining to a warrant he personally vetted, that sought to treat a Fox News correspondent as a potential criminal co-conspirator within the context of a leak investigation.  On May 15, Holder offered this sworn testimony:

"In regard to potential prosecution of the press for the disclosure of material. This is not something I’ve ever been involved in, heard of, or would think would be wise policy.

Key words: "Potential," and "heard of."  By signing off on listing Rosen as a criminal co-conspirator in a warrant (the purpose of which was to seek shocking, ongoing access to Rosen's phone and email correspondence) Holder explicitly treated Rosen as "potential" criminal, who could be prosecuted.  And the Justice Department has confirmed that Holder has both "heard of" and "been involved in" the Rosen affair.  Recall that the Attorney General was stricken with a bout of amnesia regarding what he may have known about the Associated Press snooping controversy.  Some legal experts believe Congress has Holder dead-to-rights on full-blown perjury.  The House panel takes a small step back from that brink, but forcefully indicts Holder for his actions.  Let's face it: If Holder didn't resign at the peak of the media's outrage over being spied on and treated like dirt by the DOJ -- remember this headline? -- it's far-fetched in the extreme to expect him to be even the slightest bit fazed by a Congressional reprimand.