Should Republicans Shut Down the Government Over Obamacare Funding? 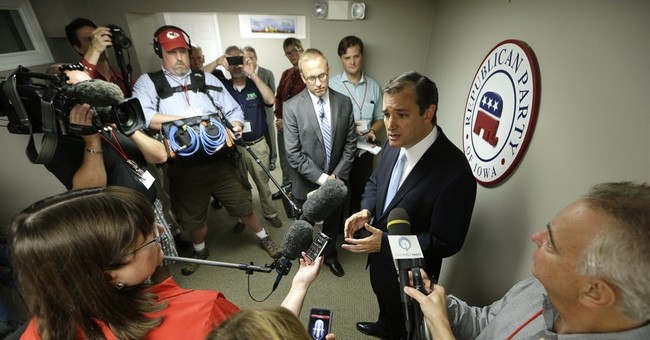 In September, Congress will debate yet another temporary budget, or "Continuing Resolution" to fund the federal government.  Democrats want the CR to undo the president's sequester cuts, and chug ahead with ever-increasing spending levels.  (Total federal outlays have doubled since 2000, yet any proposed slowdown or attempt at balance is demagogued as draconian austerity).  Republican leadership has indicated they will use their CR leverage to defend the modest spending restraint measures already in place, and to seek additional reforms.  Now a group of Senate conservatives has come forward with a new strategy: Block any short-term budget that continues to subsidize the president's unpopular and unwieldy healthcare law.  Some Obamacare opponents are pushing back against the plan, setting up an intense internecine battle within the GOP.  While the "defund it" contingent is casting the disagreement as a matter of principle, skeptics say their opposition arises from tactical concerns, not a diminished commitment to opposing the law.  This dynamic played out on the Senate floor yesterday evening, when Tea Party-aligned Senators Mike Lee, Marco Rubio and Ted Cruz engaged in a lengthy colloquy about their intent to defund Obamacare through the CR process.  The clip below is a tad lengthy, so I'd recommend toggling ahead to the 32:00 mark, where Rubio compares Obamacare to "New Coke," then explains why he believes the September showdown is the appropriate moment to take this fight to the mat.  "This is our last, best chance," he says.  A few minutes later (38:15), Cruz rises to ask three questions of Lee, the purpose of which is to lay out the trio's messaging and rationale as they kick off their endeavor:


Lee rightly observes that conservatives aren't exactly threatening to shut down the government, nor do they want to.  Their goal is to fully fund the government -- prioritizing key line items like paying the troops, sending out Social Security checks and servicing the debt -- while simply omitting the parcel of spending devoted to Obamacare.  If Harry Reid and Barack Obama refuse to go along with this plan, these Senators argue, it would be Democrats who'd force any potential shutdown.  After the floor exchange concluded, conservative Senator Tom Coburn of Oklahoma offered an extended rebuttal, applauding his colleagues for their passion in resisting a fatally flawed law, but questioning the efficacy of their game plan.  Coburn, a medical doctor and fiscal hawk, notes that he's combated Obamacare ever since it was introduced in 2009.  He also reminds Cruz & Co. that he's voted against every recent CR because he opposes them in principle, believing them to be an irresponsible form of piecemeal governance.  But he submits that risking a shutdown showdown over a fraction of Obamacare funding (much of which falls in the "mandatory spending" category, and would be unaffected anyway) is misguided and counter-productive:


This fracture presents a dilemma for those of us who think the "Affordable Care Act" is a monstrosity that must be erased before it can inflict more damage upon families and businesses.  Regular readers are aware that my opposition to Obamacare runs deep, so my heart is with the "defund" effort; but Coburn's admonitions and alternative path are sensible, and shouldn't be ignored.  Another staunch Obamacare critic, healthcare wonk Jeffrey Anderson, opines in favor of a "delay, not defund" approach:

Taken together, all of these polls suggest that an effort that is framed as defunding Obamacare is likely a political loser, while efforts to delay two of Obamacare’s most central and least popular provisions—its individual mandate and its fraud-friendly exchanges—would likely be embraced by all but the far left of the political spectrum. If congressional Republicans decide to make approval of a continuing resolution or a debt-limit increase contingent upon anything relating to Obamacare, delay of these two central elements would seem to offer the best chance for rallying public support.


On the other side of the ledger is fellow anti-Obamacare warrior Betsy McCaughey, who reasons that the administration's lawlessness leaves Congressional constitutionalists little choice but to exploit their purse-strings powers as a check on executive authority.  Ben Domenech essentially splits the difference, arguing that the "defund" effort can be part of a larger strategy to tilt the terrain toward eventual repeal -- if it's executed wisely.  At the end of the day, Coburn and Anderson are correct: The only way to eradicate Obamacare is to repeal it, which cannot and will not happen so long as Barack Obama is president.  The law, which is faltering on its own, is viewed very dimly by the public -- but the same public is wary of outright defunding it straight away, and remains very skittish about a government shutdown.  Polls show voters would blame Republicans for such a disruption, creating an opening for Democrats to muddy the waters on Obamacare, and undermine Republicans' heretofore effective critiques of the law.  I'd be willing to take the plunge anyway if the plan had any chance of succeeding, but it doesn't.  Senate Democrats and the White House absolutely will not budge on this.  (Remember, Obama threatened to veto a House bill that codified his own delay of Obamacare's employer mandate).  Though I share the impulse to stand on principle here, such an effort presents an extreme public relations risk with zero chance of paying off.  Based on that cost-benefit analysis, I tend to conclude that Coburn is right about his colleagues' otherwise admirable idea.  The most intriguing part of Coburn's speech was his suggestion that Senate Republicans could garner majority support for delaying the widely-hated individual mandate tax (in addition to the employer mandate), and could force Democrats into a very tough vote on withholding funding for Obamacare exchanges until the law's anti-fraud verification systems are established.  Philip Klein has practically been begging Republicans to go this route since eligibility standards were watered down in early July:


Black has just unveiled the No Subsidies Without Verification Act, or H.R. 2775, which does just what I suggested.  “By not verifying eligibility for Obamacare, the administration will ensure that the government hands out billions of dollars in fraudulent payments – racking up more debt for current and future generations,” Black said in a statement. “It is simply indefensible for the administration to misuse its power and authority under the executive branch to encourage fraud and abuse of taxpayer dollars in a pathetic attempt to boost enrollment in the Obamacare health insurance exchanges.” As I argued previously, Republicans should consider tying this to the fall budget battle. Adopting this measure would effectively stop Obamacare in its tracks, because HHS has already explained that, “the service described in the proposed rule is not feasible for implementation for the first year of operations.” And if Democrats refuse to accept this idea — most likely — let them squirm to explain to the American people why they’re willing to shut down the government to prevent the implementation of anti-fraud measures they once deemed necessary to make sure hundreds of billions of dollars in taxpayer subsidies are getting to the right people.

President Obama was asked by the New York Times whether he has the authority to re-engineer the healthcare law on-the-fly.  The Times buried Obama's reply, which was jaw-dropping in its imperiousness:

NYT: People questioned your legal and constitutional authority to do that unilaterally — to delay the employer mandate. Did you consult with your lawyer?

MR. OBAMA: Jackie, if you heard me on stage today, what I said was that I will seize any opportunity I can find to work with Congress to strengthen the middle class, improve their prospects, improve their security –

NYT: No, but specifically –

MR. OBAMA: — but where Congress is unwilling to act, I will take whatever administrative steps that I can in order to do right by the American people. And if Congress thinks that what I’ve done is inappropriate or wrong in some fashion, they’re free to make that case. But there’s not an action that I take that you don’t have some folks in Congress who say that I’m usurping my authority. Some of those folks think I usurp my authority by having the gall to win the presidency. And I don’t think that’s a secret. But ultimately, I’m not concerned about their opinions — very few of them, by the way, are lawyers, much less constitutional lawyers...I’m not just going to sit back if the only message from some of these folks is no on everything, and sit around and twiddle my thumbs for the next 1,200 days.


Allahpundit marvels at this answer, which amounts to, "I'm a constitutional lawyer, and I'm going to do whatever it takes.  I have this authority because I say so."  Incidentally, contra Obama, roughly half of Congress is comprised of lawyers -- including Rubio, Lee and Cruz; the latter two are accomplished Constitutional scholars.  Meanwhile, the federal cost of Obamacare is increasing, as states announce that millions of consumers should brace for double- and triple-digit premium hikes.  Conservatives' resolve to limit and eliminate Obamacare's destructive outcomes must not waver, but strategy and public perceptions matter a lot in politics.  Regardless of where one comes down in this dispute, it's wise to heed the advice of both Rubio and Coburn, who urge allies to resist questioning one other's motives.  "Team Cruz" and "Team Coburn" share the same objective -- their disagreement lies in identifying the smartest path to reach the same destination.