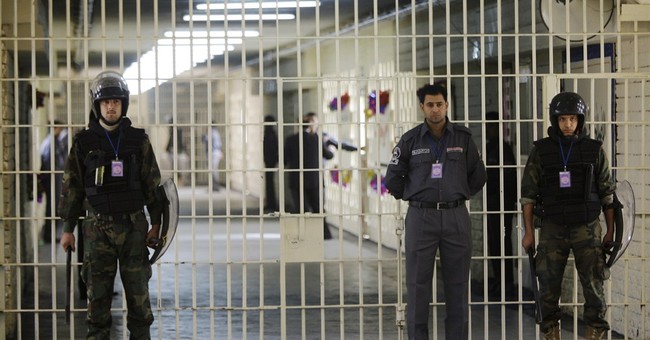 We interrupt the breathless international hysteria over the birth of a young couple's first child to bring you some real news.  Reuters has the deeply alarming story:

Hundreds of convicts, including senior members of al Qaeda, broke out of Iraq's Abu Ghraib jail as comrades launched a military-style assault to free them, authorities said on Monday. The deadly raid on the high-security jail happened as Sunni Muslim militants are gaining momentum in their insurgency against the Shi'ite-led government that came to power after the U.S. invasion to oust Saddam Hussein. Suicide bombers drove cars packed with explosives to the gates of the prison on the outskirts of Baghdad on Sunday night and blasted their way into the compound, while gunmen attacked guards with mortars and rocket-propelled grenades. Other militants took up positions near the main road, fighting off security reinforcements sent from Baghdad as several militants wearing suicide vests entered the prison on foot to help free the inmates. Ten policemen and four militants were killed in the ensuing clashes, which continued until Monday morning, when military helicopters arrived, helping to regain control. By that time, hundreds of inmates had succeeded in fleeing Abu Ghraib, the prison made notorious a decade ago by photographs showing abuse of prisoners by U.S. soldiers.

Affiliated terrorists attempted a simultaneous jailbreak at another prison north of Baghdad, but were repulsed by authorities:

A simultaneous attack on another prison, in Taji, around 20 km (12 miles) north of Baghdad, followed a similar pattern, but guards managed to prevent any inmates escaping. Sixteen soldiers and six militants were killed.


All told, 26 Iraqi policemen were murdered, and hundreds of inmates -- including untold militants -- escaped.  This is an outrage.  Questions are already flying: Is the fledgling Iraqi government capable of handling its most dangerous prisoners (remember the status of forces agreement debacle)?  Might the terrorists have had inside help?  Will this development cause the Obama administration to re-evaluate its controversial detainee repatriation policiesvis-a-vis countries like Yemen?  Remember this?  And should we be in such a hurry to close down the secure Guantanamo Bay detention facility in the middle of an ocean, from which no one has ever escaped? Granted, there's no comparison between supermax prisons in the US and Abu Ghraib, but the administration's obsession with moving the most dangerous captured jihadists on the planet to the American homeland is bizarre and irresponsible.  Public opposition to closing Gitmo has remained high and stable for years; this devastating event in Iraq will likely solidify those sentiments, especially in light of the high terrorist recidivism rate.  I'll leave you with this.  Absolutely brutal:


Al Qaeda is alive and Detroit is dead.