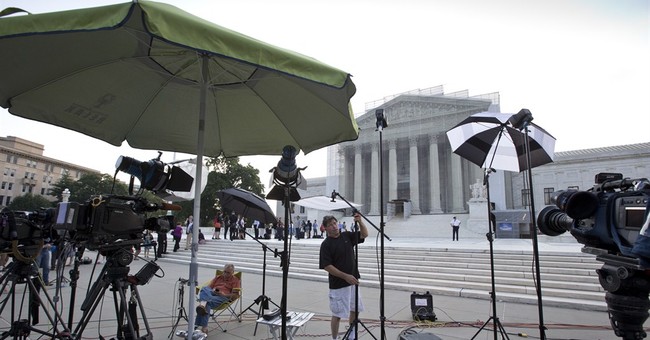 The US Supreme Court has declined to issue a sweeping ruling on race-based affirmative action, effectively side-stepping the core issue of one of the session's most anticipated decisions.  Instead of breaking new ground, seven justices remanded the Texas case back to the lower courts.  SCOTUS vacated the Fifth Circuit's decision, which wrongly dismissed a white woman's challenge against the University of Texas' admissions policies:

In a decision that could narrow the use of affirmative action in American education, the U.S. Supreme Court today ruled that a federal appeals court was wrong to dismiss a case arguing that the University of Texas illegally discriminated against a white college student when it rejected her application for admission. In a 7-1 ruling written by Justice Anthony Kennedy, the court that Abigail Fisher of Sugar Land should have been able to present her case to a federal appellate court. She argued that she was illegally denied entry because the state university considered her race as part of a package of factors in the admissions process for students who fail to meet UT’s automatic acceptance standard ... Justice Ruth Bader Ginsburg was the sole dissenter. Justice Clarence Thomas, in a concurring opinion, said he would have overturned the landmark 2003 case upholding affirmative action. Justice Elena Kagan recused herself because of her involvement in the case as President Obama’s solicitor general.

The court vacated the Fifth Circuit ruling and remanded it to lower courts for further action. According to Amy Howe of SCOTUSblog.com, Kennedy held that “because the Fifth Circuit did not hold the university to the demanding burden of strict scrutiny articulated in Grutter and Bakke, its decision afffiming the district court’s grant of summary judgment was incorrect.” Fisher argued that affirmative action in college admissions, as practiced by UT, is an unfair, simplistic and outdated method to remedy the evils of twentieth century American Apartheid. The high court’s decision today postpones a final showdown over affirmative action in college admissions — a hot button subject for nearly four decades. The Fisher case will now wind its way back through the federal judiciary and may return to the Supreme Court in 2014 or 2015.

Amy Howe at SCOTUS blog mines the "money quote" from Justice Kennedy's majority decision: "The reviewing court must ultimately be satisfied that no workable race-neutral alternatives would produce the educational benefits of diversity."  As the Houston Chronicle notes, Kennedy appeared to be rather skeptical of the current race-based system in place at UT during oral arguments.  If this case is re-adjudicated based upon SCOTUS' directives in its Fisher decision, the justices may face an opportunity to deal a decisive blow for or against racial affirmative action in upcoming terms.  A recent Washington Post poll shows sweeping opposition to the practice among the American people:

The wide opposition to affirmative action in college admissions spans partisan and racial divides. Nearly eight in 10 whites and African Americans and almost seven in 10 Hispanics oppose allowing universities to use race as a factor. And although Democrats are more supportive than Republicans of the practice, at least two-thirds of Democrats, Republicans and independents oppose it.

The specific overall percentage of Americans who reject race-based affirmative action in college admissions is 76 percent.  Among whites, the number is 79 percent.  Among African Americans, it's 78 percent.  Regardless of what the courts ultimately decide, it's clear that American society at large has overwhelmingly concluded that using skin color as a determinative factor in education admissions decisions is an unjust anachronism.