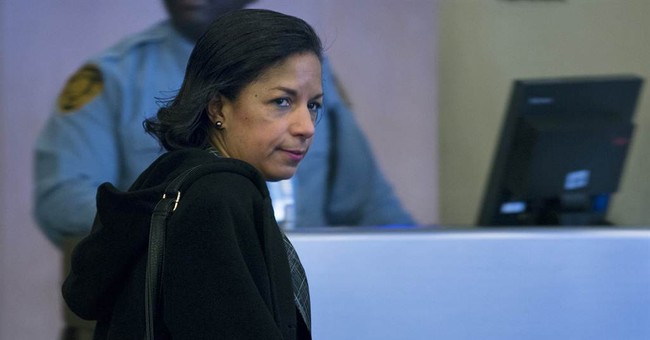 Of course he is.  Haven't you heard?  The new Benghazi emails totally vindicate Rice's talking points, so she really deserves a promotion and an apology.  (They don't, and she doesn't, but who can be bothered with such picayune details when there are incompetent apparatchiks to reward for their unswerving loyalty?)  Get ready for National Security Advisor Susan Rice, America:


The president had even higher hopes for Rice, but those plans derailed when it became clear that Senate Republicans weren't going to let her September 16, 2012 parade of inaccuracies slide.  She would have never survived a confirmation process, so Obama's done the next best thing: Promote her to a prestigious and influential position that doesn't require Senate confirmation. The only plausible defense I've seen of Rice's Sunday morning performance was that she was merely handed talking points and sent out to speak about a subject with which she was rather unfamiliar on behalf of the president.  (Sec. Clinton made it clear that she wouldn't do it herself).  In other words, Rice's excuse is ignorance -- just what you want in a candidate for an important national security position.  After all, not knowing a damn thing practically seems to be a job requirement for high-level appointments within this administration.  Heckuva job, Suze.  How 'bout a promotion?  Surely better qualified candidates exist to fill this position, but I get the sense that the president enjoys sticking his thumb in the eye of his political opponents whenever possible.  If he follows through on this decision, Obama gets to thank a hack for her commitment to the cause (ie, him) while raising a middle finger at Republicans.  I know this woman is one of the public faces of a scandal you guys care about, and here's that I think about that.  You can't stop me.  One-time Obama admirer Peggy Noonan's latest scathing column indicates that she's long gone from the bandwagon.  She identifies one of the self-defeating flaws of this president: Arrogance, and the reported Rice promotion is a case in point.  Noonan argues that Obama's extreme self-regard and sense of invincibility has poisoned and pervaded his administration, and is finally -- to quote a certain man of the cloth -- "comin' home...to roost:


We are in the midst of the worst Washington scandal since Watergate. The reputation of the Obama White House has, among conservatives, gone from sketchy to sinister, and, among liberals, from unsatisfying to dangerous. No one likes what they're seeing. The Justice Department assault on the Associated Press and the ugly politicization of the Internal Revenue Service have left the administration's credibility deeply, probably irretrievably damaged. They don't look jerky now, they look dirty. The patina of high-mindedness the president enjoyed is gone. Something big has shifted. The standing of the administration has changed. As always it comes down to trust. Do you trust the president's answers when he's pressed on an uncomfortable story? Do you trust his people to be sober and fair-minded as they go about their work? Do you trust the IRS and the Justice Department? You do not. The president, as usual, acts as if all of this is totally unconnected to him. He's shocked, it's unacceptable, he'll get to the bottom of it. He read about it in the papers, just like you. But he is not unconnected, he is not a bystander. This is his administration. Those are his executive agencies. He runs the IRS and the Justice Department. A president sets a mood, a tone. He establishes an atmosphere. If he is arrogant, arrogance spreads. If he is to too partisan, too disrespecting of political adversaries, that spreads too.


In all fairness to Susan Rice, if this woman got a big promotion, why shouldn't she?  I'll leave you with literally one word from Eric Holder about the prospect of appointing a special counsel to investigate Benghazi: