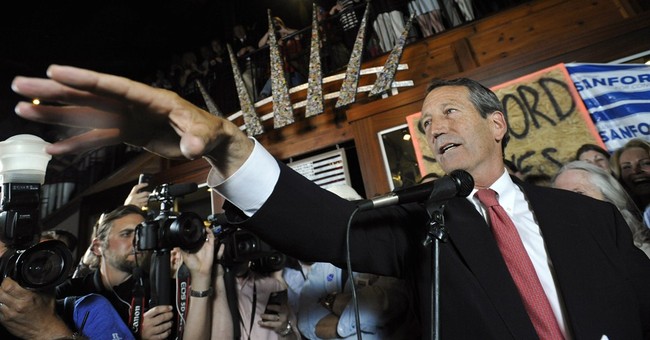 Remember when Elizabeth Colbert-Busch was supposedly leading Mark Sanford by nine points two weeks ago?  And when the race was "tied" yesterday?  Yeah, not so much.  Sanford overcame copious personal baggage to regain his old Congressional seat -- and it wasn't even close.  Sanford bested comedian Stephen Colbert's sister by nine points, carrying all five counties in the district.  How did he pull off this cake-walk "upset"?  Three explanations: Hard work, Nancy Pelosi, and the district.  The Campaign Spot's Jim Geraghty chronicled Sanford's work ethic:

If Mark Sanford succeeds in his improbable comeback tomorrow, a lot of people will be asking, “How did he do it?” A serious answer will be: “He just outworked his opponent.” Earlier today, Dave Weigel tweeted, “Sanford has 5 campaign stops today — one avail already — before Colbert Busch’s first event.” Sanford has eleven public events scheduled today; Colbert Busch has five. The week of April 22, he did 15 public events. She did six in those five days, according to her campaign’s web site. He did three public events Wednesday; she did one. He did three public events Thursday; she did none. He did ten events public Saturday, she did five.


As I mentioned on election eve, Sanford's decision to campaign against Nancy Pelosi -- almost literally -- was a savvy play.  The strategy paid dividends:

She's the other woman in a special congressional election in South Carolina that's captured national attention....No. We're not talking about Maria Belen Chapur, the woman from Argentina who in 2009 was involved in an affair with Gov. Mark Sanford. The other woman we're talking about is actually House Minority Leader Nancy Pelosi, who the Sanford campaign has repeatedly tied to Elizabeth Colbert Busch, the sister of Comedy Central host Stephen Colbert and Sanford's Democratic opponent in next Tuesday's special election...Sanford has repeatedly brought up the former House Speaker recently, and last week even debated a cardboard cutout poster of Pelosi to call out Colbert Busch for not accepting more than one debate.

And let's face it: SC-01, which Mitt Romney won running away, was not prepared to send Barack Obama and Nancy Pelosi more help in Washington.  Period.  The Republican nominee's numerous warts couldn't change that fact.  Colbert-Busch deleted her virtual trail of liberal views, declined to commit to repealing Obamacare, and wouldn't say if she'd support Nancy Pelosi for Speaker.  No thanks, said the district's voters, who promptly elected a deeply flawed conservative to hold the seat.  I'll leave you with a few sharp Twitter take-aways from tonight's result:


The lesson here is that special elections are really, really hard to poll. Which everyone knows, but always seems to forget.

It looks like Colbert-Busch underperformed Obama in 4 of the 5 counties in SC-01.

Fundamental problem for Dems: if they can't beat Sanford in R+11 #SC01, how can they beat less damaged GOP candidates in R+anything seats?

Well that's $1.2 million plus dems won't have for elections next year.


That last tweet explodes one of the Lefty excuses we're hearing: "We never expected to win this one, and didn't really try!"  $1.2 million (and then some) would suggest otherwise:

Besides raising far less money than Colbert-Busch, Sanford is taking a huge hit when it comes to outside spending. According to OpenSecrets.org's profile of the race, outside groups have spent more than $929,000 on independent expenditures against Sanford. Conservative groups have spent only about $15,000 to help him.

I also can't help but get a kick out of liberals' feigned outrage over Sanford's personal conduct.  I agree that much of it has been reprehensible, but it'd be nice if the party of Bill Clinton, Ted Kennedy and Barney Frank would spare us the moralizing lectures.  At the end of the day, this was one isolated race, and a special election at that.  I'd shy away from trying to divine any profound meaning or broader trend from this outcome -- aside, perhaps, from the fact that running against the return of Speaker Pelosi remains a powerful tool in the GOP's arsenal.  She's that polarizing and unpopular.  But in general, some parts of the country simply will not vote for a liberal under any circumstances.  South Carolina's First Congressional District is one of them.