‘Tough Guy’: Trump and Conway Respond to Biden’s ‘Behind the Gym’ Comment 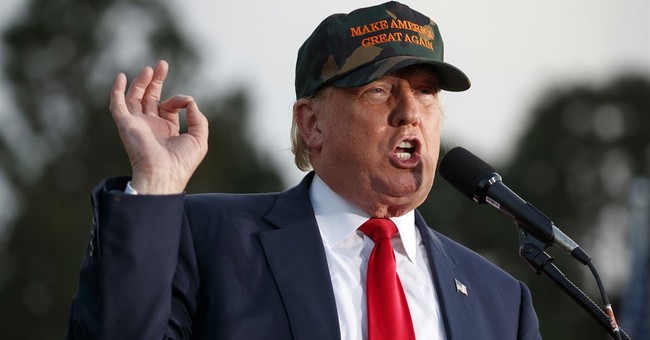 Donald Trump responded Tuesday to Vice President Joe Biden’s statement that he wishes he and Trump were in high school so he could take Trump “behind the gym” for his remarks about women.

“He wants to bring me to the back of the barn. Ohhh,” Trump said with derision. “Some things in life you can really love doing.”

Last Friday at a Clinton campaign stop in Pennsylvania, Biden was discussing Trump’s lewd comments about women. “[Trump] said because I’m famous, because I’m a star, because I’m a billionaire I can do things other people can’t. What a disgusting assertion for anyone to make,” Biden told the crowd. “The press always ask me don’t I wish I were debating him? No, I wish we were in high school I could take him behind the gym—that’s what I wish.”

During an interview Tuesday evening, MSNBC’s Chris Matthews jokingly gave Biden a pair of boxing gloves, saying that might help him in his “new endeavor.”

Biden doubled down, saying: “I’m ready. I’m ready.” He explained that he was “trying to make a point.”

“People didn’t act in the locker room like he [Trump] talks about,” Biden said. “That’s not true. And you and I both know, if in the locker room in a school I went to, one of the guys said, ‘this is what I’m going to do because I’m the star halfback or quarterback, I’m the boss,’ and my sister and her girlfriends are out there, I would take the guy behind the gym.”

“The point I was making is…he’s insulting everybody in the neighborhoods I come from, and the people who played ball,” Biden explained. “This is just absolutely unacceptable behavior, period.”

During Tuesday’s rally, Trump also used Biden’s comments as an opportunity to point out the media’s obvious bias.

“And by the way, if I'd said that they [the media] would say, 'He's violent. How could he have done that?’"

“I think if Donald Trump said anything even remotely close to that we would’ve had our hair on fire for three days,” said Conway. “We would’ve had high school psychologists coming in and talking on air, we would have been talking about bullying and violence.”

Conway also labeled Biden a “bully” during the interview.

“I thought he acted like a bully,” said Conway. “ [It] was very disappointing to hear the Vice President of the United States suggest violence the old-fashioned way.”