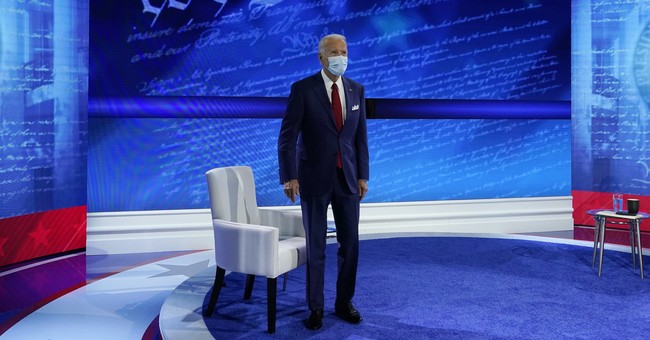 During a Thursday night town hall on ABC, Democratic presidential nominee Joe Biden proclaimed that he believed eight-year-old children should be free to change their sex and live a transgender life if they so choose.

The statement came in the form of an answer to a question from a voter who says she has "two daughters," a 10-year-old and an 8-year-old, the youngest of whom she said is transgender. The mother expressed concern that the Trump administration had appeared to work against transgender Americans and wondered what Biden might do differently.

It was standard fare for the forum, a softball question in a Democratic town hall being hosted by a network that has exhibited strong bias in favor of Joe Biden. The voter was clearly expressing a radical position on transgender children, a deeply unpopular belief that children of all ages should pick their gender and be allowed access to hormones and even surgery that would change their lives forever.

Many young adults who transitioned to their non-biologic sex as a child or teen have experienced depression and regret, seeking help to "detransition," and finding subsequent scorn from the very communities and organizations that encouraged them to make such a radical choice.

Many people argue that children under 18 simply lack the decision-making capacity and knowledge of psychological repercussions in order to make such a drastic change to their body and lifestyle. Some parents have even faced jail time for daring to speak out on the issue with concern over what is being taught as fact and fiction in public schools.

Press release from lawyer of BC father who tomorrow will go to court and say he is willing to be imprisoned to shed light on what is going on in our schools and gender clinics in order to protect children. Please share. pic.twitter.com/6aCmlHlKIA

Certainly, a good follow-up question from any moderator worth his salt at that point would have been probing Biden on whether he thought "zero discrimination" meant allowing parents to approve hormone treatments and surgeries for their elementary school children and using taxpayer dollars to pay for it. All of these issues are important to Americans and are currently being litigated. But of course, Biden was allowed to move on to his own talking point.

"And what's happening is, too many transgender women of color are being murdered," he said, escaping the transgender children question as quickly as possible. "I think it's up to now 17 but don't hold me to that number."

Of course, the ever-popular claim that Black transgender women are under attack in the United States, a favored topic for the far-left which Biden very obviously had no mastery of, is also full of holes. Biden then tried to tie his dubious claim back into protecting the transgender identity of the voter's child.

Additionally, just this week Supreme Court nominee Amy Coney Barrett was excoriated by the Left for saying "sexual preference" instead of "sexual orientation." The woke fury over her mistake even triggered a change in Webster's dictionary.

Literally two days ago we were told that “sexual preference” was offensive. Surely saying transgender children “decide” to be transgender offensive then. What happened to Born This Way? Did Lady Gaga teach us nothing?

"I promise you," he said floating back into another non-answer. "There is no reason to suggest that there should be any right denied your daughter...that your other daughter has a right to be and do." It was not clear what he meant by a "right denied" to one young child that would not be available to the other.

Biden, who has held public office for almost 50 years, then cited his late son Beau's record for success in transgender policy, crediting him for passing a law as Attorney General of Delaware.

As parents look to the future of America they should seek leaders with moral fortitude and conviction in their answers. As the radical left continues to push forward agendas that even put children at risk of psychological harm, parents deserve to hear from a candidate with a clear belief in what type of role the executive branch of government would play in defending children from harm. They need more than a pandering old bureaucrat who tosses a word salad and leans on his tired Uncle Joe anecdotes.