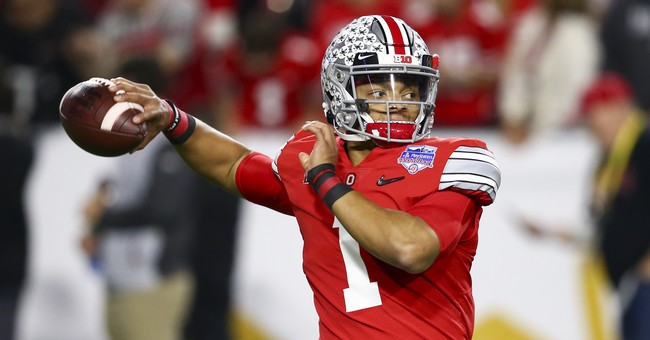 Following the announcement last week that college Big Ten football would suspend their season over lingering concerns about the Wuhan coronavirus, one star quarterback decided to take matters into his own hands.

Justin Fields, who was set to start his second year at Ohio State University after a promising 2019 effort as the Buckeye's quarterback, said his teammates have worked too hard and too long to have their season snatched away from them.

On Sunday, he launched a petition on MoveOn.org that asked fans and players to support his call to reinstate the season.

"We, the football players of the Big Ten, together with the fans and supporters of college football, request that the Big Ten Conference immediately reinstate the 2020 football season," Fields said on behalf of his peers. "Allow Big Ten players/teams to make their own choice as to whether they wish to play or opt out this fall season. Allow Big Ten players/teams who choose to opt out of playing a fall season to do so without penalty or repercussion."

This cause is close to my heart - please sign: https://t.co/yFKlYE7pP0

As of Monday morning, the petition had garnered more than 230,000 signatures. The safety of the players, Fields said, was not in question.

"We want to play. We believe that safety protocols have been established and can be maintained to mitigate concerns of exposure to Covid 19," Fields said in support of the petition. "We believe that we should have the right to make decisions about what is best for our health and our future. Don’t let our hard work and sacrifice be in vain. #LetUsPlay!"

In a Monday interview, Fields also noted that the seniors on the team were being robbed of their last chance to play and prepare for a professional career.

"The guys that have come back for their fifth year, coming back off of injury, I think we owe it to those guys the most,” Fields said during a Monday interview on ESPN Radio. “I’ve just seen behind the scenes all the work that they’ve put in and how much they really care about it, and I also believe all the coaches and all the players’ parents want us to play, and they’re also safe with the guidelines Ohio State has set."

Fields also said that other college football conferences like the ACC, SEC, and Big 12 agreed to go forward with their seasons and he simply didn't understand why it would be any different for Big Ten to follow suit. For the players, he said, being told they can't play while watching other conferences go forward would be a major emotional blow.

"If the SEC, ACC and Big 12 all think that we can have a season safely, then I don’t see any reason why the Big Ten can’t do the same,” said Fields. “If we’re sitting at home watching the other conferences play, I think that’s gonna hit somewhere down deep. Sometimes it doesn’t hurt that much until you realize that you’re not playing, but I think the players don’t realize how much it’s gonna affect them once they see other conferences and other schools playing, and we’re just sitting at home not doing anything."

Fields is expected to be a top draft pick by the NFL when he concludes his college football career. But to him, that doesn't mean he is interested in taking time off from working hard and winning games with Ohio State.

"My love for college football, and my love for my teammates at Ohio State," Fields said. "I’ve seen the guys battle back from injuries, and I’ve seen how hard our coaches have fought for us to play, so really just for them, and just my love for the game."