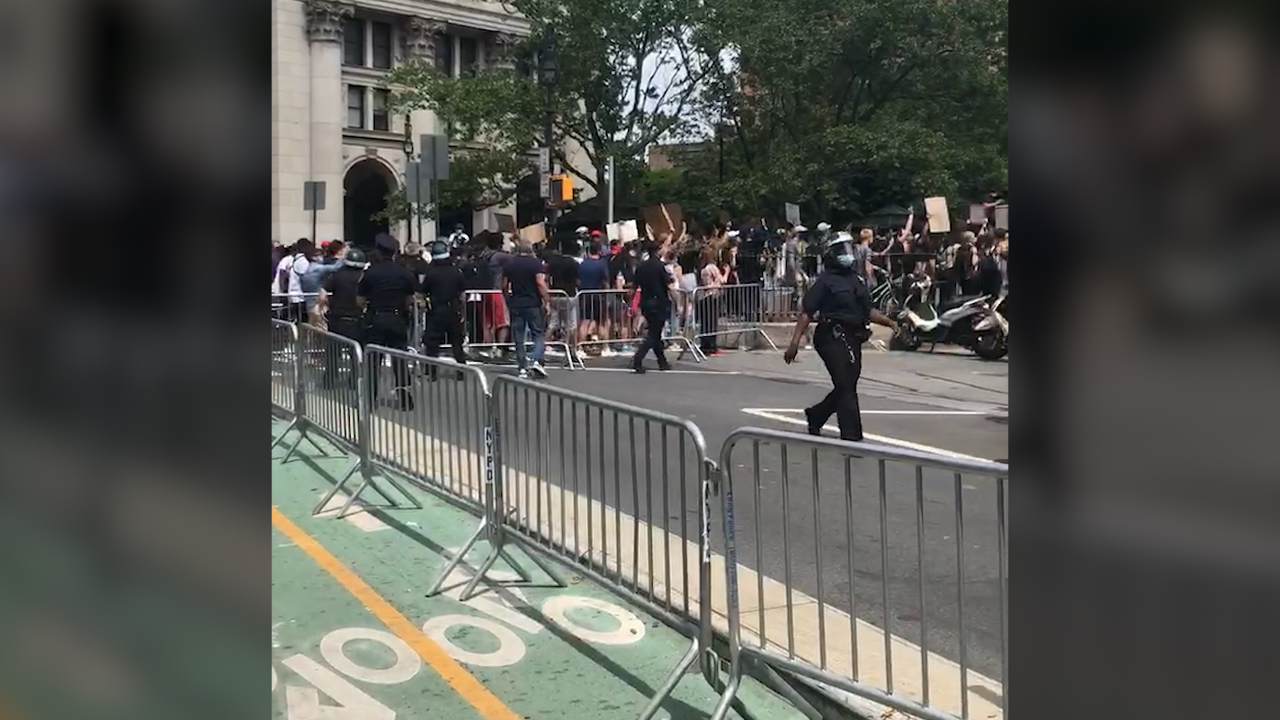 *This article contains references to violence and threats against law enforcement in New York City, the violent deaths of George Floyd and Breonna Taylor, and videos of and references to demonstrations where graphic language is used by protesters.

New York, New York – More than a week of protesting has led to violence and costly destruction in cities across America and driven a wedge between law enforcement and the many people they are trying to protect. Protests began as a cry for justice for George Floyd, but even now that all four officers involved in his death have been arrested and charged, demonstrations have gone on and, in some cases, instances of violence against police have ramped up.

The death of 46-year-old Floyd on Memorial Day stirred protesters and marchers of all races, many carrying signs that represented #BlackLivesMatter to fill the streets, first in Minneapolis and then across the nation. But when charges were announced against the now-fired police officers involved in Floyd's death, marchers branched off from their initial demand for justice and moved on to a demand to end systemic racism.

This week in New York, as the NYPD fought to keep peace in the streets as rioters, looters, and ANTIFA set fires, attacked police officers, and ravaged businesses and homes, the protesters declared themselves to be peaceful. But the words hurled at officers, including black, Hispanic, and female members of the NYPD, were not evocative of peace. To the protesters at Brooklyn Bridge Park on Thursday, the police were an enemy that they intended to defeat.

Anticipating a march that began on the Brooklyn side of the bridge to reach the entrance to Manhattan, NYPD officers directed traffic and held back a gathered group of angry protesters in the park. In so doing, according to the protesters, they were "dirty pigs" and "white supremacists" who intended to harm black Americans with impunity.

They continued their cry for justice, but didn't describe what that meant to them, beyond the legal prosecution of those involved in unjust killings. If they did not receive their vague call for justice, they threatened to "shut it down."

Officers stood peacefully as protesters hurled insults at those stationed at the bridge. One protester with a megaphone spent a significant amount of time heckling a female officer with profane assumptions about her sexuality. A black officer directed traffic was repeatedly jeered for his involvement with the police force.

Eventually, the protesters in Manhattan decided to charge the barrier and join their Brooklyn counterparts on the bridge. Police initially rushed to the now dismantled barricade but instead of pushing the crowd back, they simply opened the fences a safe distance to allow the marchers onto the bridge.

Protesters just shoved through barricades and charged the Brooklyn Bridge. NYPD rushed to stop them but ended up letting them through, also opting to close both lanes of traffic. Protesters continued to taunt “dirty pigs” as the marched onto the bridge pic.twitter.com/MX2ggywCNn

Among the crowd of angry protesters, a few quiet voices thanked the police for protecting them and one tossed a bottle of water to an officer.

These are the “white supremicst” NYPD being heckled. One protester just broke rank and tossed a bottle of water to the cop waving cars through. pic.twitter.com/cyef5vcAZb

Demands for defunding police departments, cutting budgets, and introducing "conflict mitigators" have been introduced by activists and politicians this week in many parts of the country, including NYC, where Mayor Bill de Blasio suggested cutting $1 billion from the law enforcement budget.

In New York, violent crime has been on the rise in recent years, a disturbing trend after many years of record low numbers of homicides and serious crimes. Though nearly 2,000 New Yorkers have been murdered in the last five years, many of whom were black, the protesters hold the NYPD responsible for the most egregious crimes of inherent racism.

"Who in their right mind would want to be a cop?” The protest leader asked at the Brooklyn Bridge. “A sadistic mother—-er, that’s who!”

But as protesters attempt to exemplify armed police at "peaceful" protests as violent enforcement, it is police that are being hurt. Dozens of law enforcement across the country have been the targets and victims of violence by mobs convinced that those who signed up to "protect and serve" are the oppressors. Police equipment, vehicles, and even precincts have been destroyed. Dozens of police, National Guard, and other law enforcement have been hospitalized, some remain in critical condition. Two have been shot dead.

As protesters continue their march for justice and "just to be heard," they hoist a figurative effigy of police as the symbol of all that is racist and evil. But it is police that are racking up casualties in this unprecedented time of civil unrest. It is minority small business owners and residents of underprivileged communities that are left to clean up the streets now littered with shattered glass and graffiti.

I understand some cops have, from time to time, taken a knee in solidarity with protesters, but they can do more. My suggestion:

1. take a knee
2. then lay all the way down on the street
3. let the protesters march across your immobile bodies
4. hurt all over
5. stay there

This article is part of a series of reports from the road as Townhall travels around the Acela Corridor this week to assess the health of American cities amid the Wuhan coronavirus pandemic and protests following the death of George Floyd.