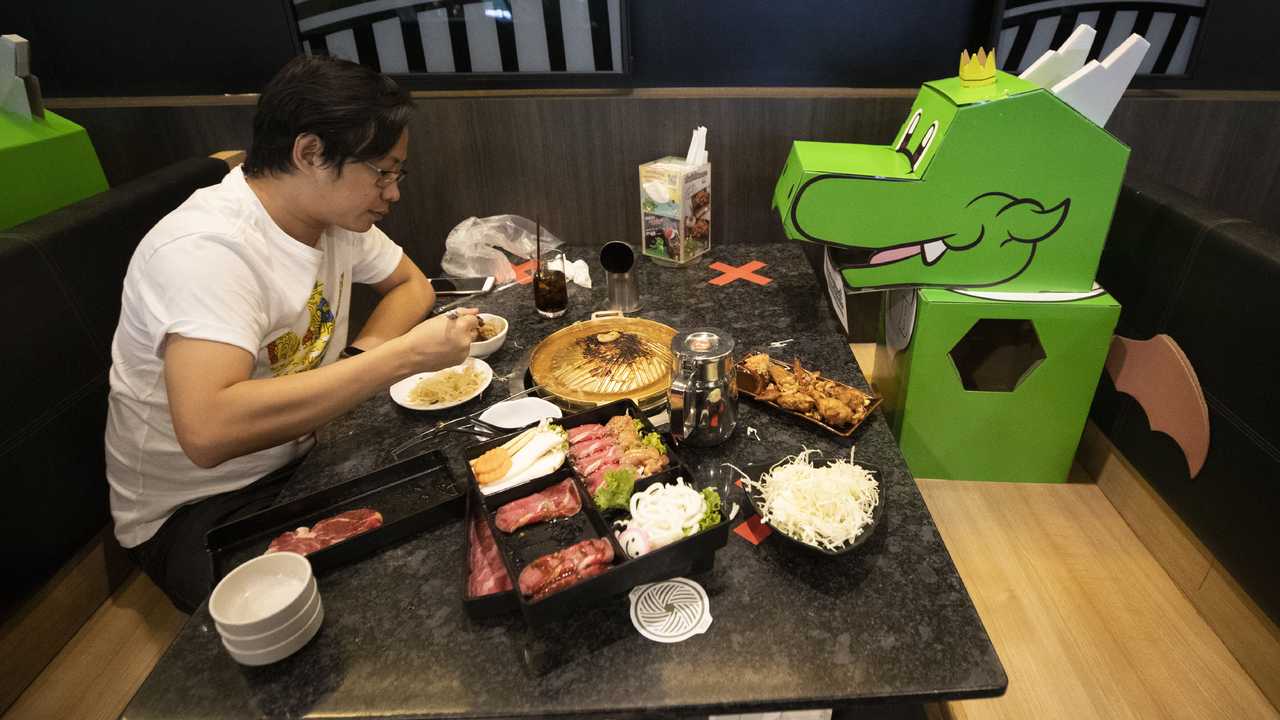 "At least six feet apart" has become dogma for people all over the world hoping to return to some version of life as it was before the Wuhan coronavirus pandemic. But some businesses fear they could be shut down again if they push the limits and have come up with some... creative ways to enforce safe space between patrons.

Restaurants are in a unique predicament as diners are not able to wear masks while eating and drinking, necessitating quite unusual measures to adhere to social distancing guidelines. Dining rooms across the planet have been forced to remove many tables and barstools to allow for six feet between patrons, greatly lowering the potential for revenue. When possible, many bars, cafes, and other eateries are expanding their patio seating or even taking over sidewalks in hopes of bringing in enough business, but other restaurants have come up with some very different ideas, with some unexpected props.

A restaurant in Ocean City, Maryland, ordered 10 custom inner tube tables meant for single diners only in hopes of reopening their popular summertime restaurant even with concerns about COVID-19.

Owner Shawn Harman said the tables, meant only for those waiting to get into his restaurant who would normally gather at the bar, said the bumper tables were not a long term solution, but fun in the meantime.

"I mean, it's a novelty, it's cool. It's a great photo opportunity for them," Harman said to CNN of the guests willing to get into the contraptions. His goal for the already destroyed tourist season in one of the DC area's most popular beaches was simply to remain open.

"Our goal for this year is to be here next year. It's as simple as that," Harman said. "We just want to make sure our employees are taken care of, and they can make enough money to get through the winter."

He did not comment on whether he thought the rolling dining chairs might actually help mitigate the threat of infection from COVID-19. As of publication, the CDC has no official position on inner tube tables.

One restaurant in Thailand employed a staff of green cardboard dinosaurs to occupy seats closed off for social distancing. The happy-looking dinos are actually the restaurant's mascot "Barbegon," and can even go home with diners to wear as costumes after their meal.

The dinosaurs sit at various seats marked with red X's throughout Bar-B-Q Plaza in Bangkok, letting diners know where they will be at the safest space. Other restaurants have repeated this effort with popular animal characters and other mascots. Nothing says "safe from viral infection" like a restaurant full of stuffed animals.

A cafe in Germany crafted its own system for keeping patrons away from each other by asking them to wear specialty hats. The hats feature several styrofoam pool toys, "noodles," facing in several directions to prevent possible infectors from invading their space.

The real effect of the noodles, however, was less certain. Cafe Rothe owner Jacqueline Rothe said she was pleased to reopen and had some fun with her novel hats but realized the challenge of actually keeping restaurant clientele at the prescribed safe distance.

"It was a perfect gag and of course it was funny, our customers were really into it," Rothe said. "But what it did show to us [was] how difficult it is to keep a distance of 1.5 meters."

Not to be outdone, a German Burger King made an enormous version of their signature Burger Crown to keep fast food clientele away from each other, and in high fashion.

In France, one restaurant went retro and took us back to the days of "Get Smart" and the famed "Cone of Silence" with a shield prototype that kept diners in private bubbles as they ate.

H.A.N.D. in Paris showed off its new idea with models happily chowing down on tiny salads. H.A.N.D. director Mathieu Manzoni said he felt the cones were more "poetic" and "pretty" than some other social distancing measures he had seen.

Poetry and aesthetic aside, however, it was less clear if dinner companions would be able to hear each other talk across the table. It was also unclear how service of stemware, beverage top-offs, and many other standard restaurant services would occur.

A man and a woman demonstrate dining under a plastic shield in a Paris restaurant on Wednesday, May 27, 2020. As restaurants in food-loving France prepare to reopen, some are investing in lampshade-like plastic shields to protect diners from the virus. | Photo Thibault Camus pic.twitter.com/3rUjjOY9FF

Several restaurants have played with the idea of using mannequins to fill empty seats, including the famed Inn at Little Washington, but mannequins are heavy to move, difficult to store, and can be cost-prohibitive in large numbers. One restaurant in South Carolina had the perfect solution.

The owner of Open Hearth in the quaint southern town of Taylors, SC, said she felt the blow-up dolls, providing a vastly different service than what they are traditionally known for, were better than "scary, yellow tape or roping off" unoccupied tables. The dolls were dressed up in casual attire and even donned wigs as they did their part to stop the spread.