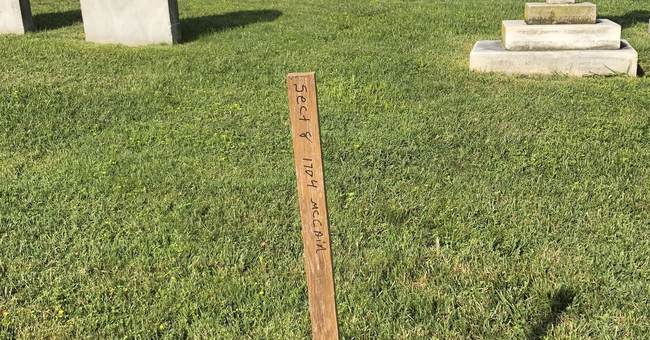 The effective cancelation of Memorial Day this year due to the Wuhan coronavirus pandemic stopped many Americans from kicking off their summer, enjoying a family cookout, and taking that first-of-the-season trip to the lake. And while putting the holiday on hold as states remained locked down over fear of viral spread seems like a minor inconvenience in the name of safety, the heart of Memorial Day, honoring the men and women who made the ultimate sacrifice in service of the United States, was a difficult tradition to give up for many Americans.

As much of the country hobbles slowly through the earliest phases of restarting normal life following the COVID-19 disaster, the final resting places of many fallen heroes were unable to receive visitors this Memorial Day. Most military cemeteries, including Arlington National, permitted only family members to visit their loved ones this Memorial Day, blocking many from being able to lay flowers and memorialize their friends.

One woman, however, noted that unlike Veteran's Day in November, Memorial Day was a day when many people who were not family, particularly younger Americans who lost friends in more recent years, would make the journey to honor their buddies at their grave. On a visit to memorialize her grandfather at Arlington National Cemetery on Monday, Emily Domenech realized that the holiday would not be the same without friends coming to the national landmark with flowers and wreaths as she had come to expect on her annual Memorial Day visits. From the cemetery, she made a simple but profound offer to friends of the fallen.

"Does anyone have buddies buried in Arlington who they would like visited today?" Domenech asked on Twitter. "Since only family members are allowed in, I would be honored to pay respects on your behalf..."

Does anyone have buddies buried in Arlington who they would like visited today? Since only family members are allowed in, I would be honored to pay respects on your behalf...

Domenech, a Senior Policy Advisor for House Minority Leader Kevin McCarthy, spent much of her early career as a deployed civilian traveling with enlisted servicemen and women across the globe. She got to know the camaraderie of the military well, and noted how important visiting those killed in action was to members of the military.

"Particularly on Memorial Day, you tend to see a lot of military members who are visiting their buddies – way more than Veterans Day," Domenech told Townhall on Tuesday. "They're remembering somebody who they knew and served with who has who passed away, usually on deployment." She noted that one particular section of graves in Arlington, section 60, was most frequently visited by veterans who had lost their friends in action in Afghanistan and Iraq.

After visiting her grandfather Colonel John Domenech, a veteran of World War II, Korea, and Vietnam, Domenech was compelled to reach out to one veteran friend who was not able to visit his buddies at Arlington on Monday, without having a family member buried at the cemetery. She sent a text asking if she could honor anyone on his behalf. But he didn't reply right away, she said.

"So I just decided to Tweet it," Domenech said. She had no idea her simple gesture would touch so many people and send her on a day long journey to pay respects to so many.

"I got like a couple of replies right away," she said. One early request was from Amber Smith, a veteran Army combat helicopter pilot, whose friend Mike Slebodnik was Killed in Action in Afghanistan in 2008. While Emily tracked down the exact location of Slebodnik's grave, news of her offer began to catch on. Once she visited the first few requested graves, her post had been widely shared and more names of fallen friends and requests for flowers and photos poured in.

My friend @ehdomenech went and said hello to my friend CW4 Mike Slebodnik this morning at Arlington who was KIA in Afghanistan 9/11/2008. She cleaned off his gravestone & left him flowers. Thank you so much remembering him & honoring all of the fallen.
???????? https://t.co/Cf2SfJbcIK

Soon after she went viral, Domenech realized requests weren't just coming from veterans who had lost fellow soldiers in action. Families unable to travel in order to visit the graves of their loved ones had also begun reaching out. In no time, hundreds of people had responded to her Tweet from across the country asking Domenech to share a photo of a grave and honor someone by proxy. She realized she was committed to an enormous task that meant quite a lot to many people.

"I was like, 'oh no, I'm like wildly unprepared to do this properly,'" she said of her reaction to the influx of requests. "It started to get really overwhelming very quickly." She recruited friends and family to help her sort through tweets to find the requests in the sea of supportive comments. After a short break for lunch, she returned with her parents in the evening to continue her vow to visit requested resting places.

With hundreds of requests throughout the day, Domenech, with the help of her family, was able to visit 60 fallen American heroes in Arlington National Cemetery on Memorial Day. She only left when the cemetery closed and everyone was asked to leave. She said the experience was very emotional for her, but she was honored by the chance to memorialize patriots on a day the nation was told would be only a shadow of what it normally is.

"I thought there was a chance I might get like 10 or 12 requests, which I thought would be cool to do," she said. "But it never occurred to me that this would be such an impressive thing to so many people." But it was impressive to a great many people moved by her simple gesture in a time where negative news and political sniping dominates social media.

The unexpected response across the internet over the last few days was a reminder to Domenech not to become bogged down by negativity in a time where animosity and put downs dominate social media. Twitter, she says, can be used for good after all.

"It is easy to be jaded around here and let things become impersonal," she said. Twitter users even attempted to send Domenech money for her efforts on Memorial Day or just offer to "buy her a beer," she said. She didn't accept the money, instead suggesting that people contribute to veteran oriented charities like Boot Campaign and Travis Manion Foundation, who also work with families of fallen service members.

Though Domenech was initially motivated by the COVID-19 caused restrictions when she set out to help connect friends on Memorial Day, she says this is the start of something she hopes to continue for years to come. She's already in contact with one charity in hopes of planning to do the same next year, on a much larger scale.

"I'd really like to try to do this in an organized way next year," she said. "If we planned it and got more volunteers, you could get way more people and then you could still have the same impact."

Of all the graves I visited yesterday, this one moved me the most. I will never forget it ?????? https://t.co/r6mOF2vwE8