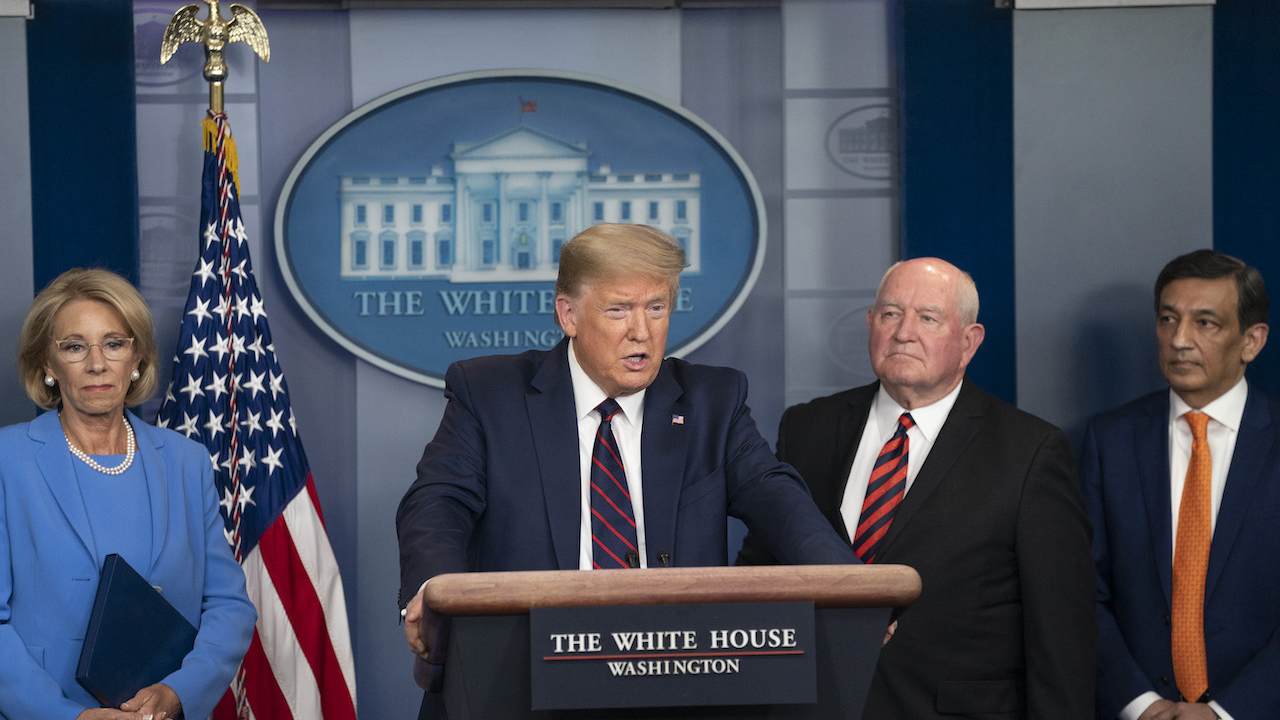 Just before the holiday weekend, President Trump announced that he would be revealing a new task force on Tuesday with one clear mission: to restart the United States economy. The Coronavirus Task Force, as well as other White House appointed councils of health experts and department heads, have spent the past six weeks navigating a health crisis and charting solutions as they go, but answers about economic restart have been murky and inconsistent at best.

For better or worse, the president, along with doctors, military leaders, cabinet members, epidemiologists, private industry heads, and government agencies have spoken directly to the American people on a daily basis, giving as much detail on their progress on fighting the Wuhan coronavirus as possible. The progress reports have helped ease the minds of Americans gripped with fear of disease but have not yet been able to give a concrete "end date" or surefire solution to the pandemic. And while the US has led the world in medical innovation and technology in the fight against the "invisible enemy," the absence of certainty has left Americans with grave concerns about their economic health in addition to worry about disease.

In under one month, nearly 17 million Americans have filed unemployment claims. Family businesses, small businesses, and even big corporate businesses are experiencing a financial fallout due to a purposefully shut down economy with no end in sight. Many will not survive the sudden economic downturn, even with a government bailout. Yes, the CARES Act stimulus package was designed to help businesses stay open through Small Business Administration loans and efforts like the Payroll Protection Program, but few would argue that this is a long-term fix and not a fairly convoluted, emergency solution.

The economy will not wait for a COVID-19 vaccination to become available. The clock is ticking on lives that depend on the flow of commerce, and there is no way to press pause, no matter how many billions of dollars Congress chooses to squabble about in the immediate future. Americans need their thriving economy to reignite, and they need that to happen now, in any way possible.

Enter the "Opening Our Country Council," as the president dubbed his newest task force on Friday. Trump said that the assemblage of business leaders and health experts will "include names that you have a lot of respect for." The president also strongly asserted that he would remain focused on the health of Americans as he launched a response team to the economic devastation.

"I want to get it open as soon as possible," Trump said of the economy on Friday. "This country was meant to be open and vibrant and great." The president reiterated that he would continue to listen to medical advice from the Coronavirus Task Force that includes Drs. Deborah Birx and Tony Fauci.

"I listen to them about everything," Trump said. "We're not doing anything until we know that this country is going to be healthy. We don't want to go back and start doing it over again."

Bearing in mind the continued threat of the novel virus that currently has no official treatment protocol and no vaccine, there are still ways that the Opening Our Country Council can put gas in the tank of the US economy. Primarily, the new task force can start assessing data on local levels and advise governors and the president on lower-risk areas. Not every state, city, and county is as susceptible to the ravages of the virus as New York City, for example. New York accounts for nearly half of the 22,000 deaths from COVID-19 in the United States.

The council can also suggest a methodology for containing populations that are at greater risk and continued social distancing guidelines that can coexist with open businesses. For example, recent policies enacted by Michigan Gov. Gretchen Whitmer, which closed off entire "non-essential" sections of "essential" stores, could have potentially been prevented by advice from a council that used actual data and risk analysis to show the negatives of her decision have far outweighed the positives. A state full of people suddenly alarmed that they may not be able to buy vegetable seeds or a car seat for their child is far less likely to be compliant when other restrictions are levied.

Another mandatory function of the Opening Our Country Council would be to identify those businesses which could feasibly reenter the marketplace with low health risk to the public. If museums and art galleries stick to strict social distancing protocols and limit the number of people allowed in, like grocery stores and big box stores have done, many people could get back to work and begin taking in revenue. It's not necessarily an economic boon, but it's not nothing.

Restaurants and bars, considered to be one of the hardest hit industries in the age of pandemic, could also reopen under strict protocol. Tables within a six or even ten foot parameter could be removed and volume reduced significantly, but the doors could open and bartenders and servers could start earning.

As antibody testing ramps up and the promises of its widespread availability morph into reality, those with known immunity to COVID-19 can usher in the first wave of economic resurgence. For this reason, those tests, serology tests, should absolutely be a priority of the Opening Our Country Council.

The president, often criticized for his optimistic outlook for the United States, has shown tremendous restraint in recent declarations of what the nation is equipped to deal with right now. He also realizes that the economy, which began 2020 with more jobs than ever before, is life or death for all Americans, even in the time of a pandemic. We simply cannot remain frozen waiting for the "all-clear" that no one will ever get infected again. We need expert guidance on how to move forward in a virus-stricken nation. The new task force should be designed to provide just that.

Share this on Facebook
Tweet
Why is AOC Sobbing on the House Floor?
Katie Pavlich
So, That's What's Keeping the FBI Up at Night Regarding Afghanistan
Matt Vespa
Want to Guess What's Wrong With VICE News' Article About COVID?
Matt Vespa
House Dem Condemns Tlaib's Anti-Semitic Remarks
Reagan McCarthy
A New Hunter Biden Deal Has Been Revealed…in Libya
Katie Pavlich
I Mean, A Democrat Would Say That When Caught Violating Their Own COVID Edicts
Matt Vespa
CARTOONS | AF Branco
View Cartoon
Most Popular