This Hollywood Movie Nailed Life During a Pandemic...Almost 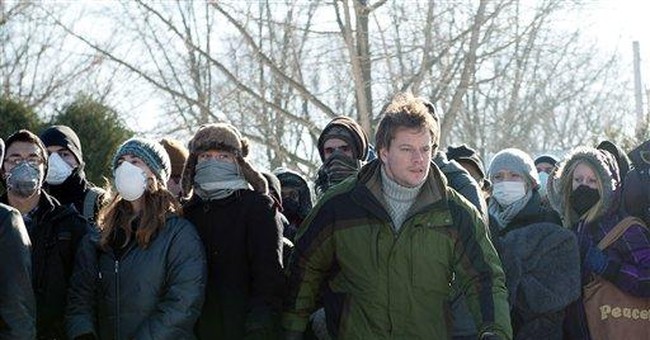 In the age of pandemic and adapting to life with more limitations than we've ever known as a free society, it is natural to wonder how close novelists and filmmakers came to predicting reality. One movie that featured a fictional virus overtaking life across the world got remarkably close to getting it right, with a few notable exceptions.

In "Contagion," which premiered in 2011, an American woman sets off a global pandemic by contracting a novel virus during a business trip to Hong Kong. Throughout the movie, the virus takes hold, country by country, laying waste as it spreads like wildfire throughout the world. In the movie's version of the United States, public panic and uncertainty gripped the nation in the early days, much like it has in the past several weeks in real life.

Remarkably, the cinematic version of a masked world afraid to shake hands landed a few predictions on the nose. The public effects of a reckless journalist hunting for clicks and distrust of top brass at the CDC both rang true in recent days. Local governments putting together makeshift hospitals in large, unused spaces, grocery stores with barren shelves, and the idle hope of a fast vaccination rollout also mirrored reality.

The Steven Soderbergh-directed film didn't entirely predict the pandemic world by luck. Details and likely public reactions were the result of months of consultations with the Centers for Disease Control and Prevention and several epidemiologists. Inspiration for the "hyper-link" thriller also came from the looming threat of SARS and the early days of H1N1.

In the stone-cold harshness of reality, however, even this movie with its well-researched, clever, and thoughtfully constructed content cannot correctly predict the life during a global lockdown. In the early weeks of national emergency, as businesses closed, social distancing was defined, and data was gathered, isolated Americans could say with flippancy, "hey, it's just like that movie!" But with a month of separation from the "before time," it has become clear that the two-hour film with its beginning, climax, and conclusion missed the mark of reality in several key ways.

Where was the social distancing?

How were these people out shopping? The virus in "Contagion" is presented as having a mortality rate between 25 and 30 percent, a jarring number that greatly eclipses the estimated rate of COVID-19. "MEV-1," as the fictional virus is eventually known, also doesn't seem to target any demographic over another, even killing schoolchildren in "clusters" before any national lockdown. A later scene in the movie shows an immune dad waiving his government issued "I'm immune" wrist band to get into a department store. The implication being that such a store with its decidedly non-essential items would be open as most of the world is still in isolation.

After a revelation that millions of people had died across the globe, the immune father takes his non-immune teenage daughter to a grocery store that is actively being looted. Only when a sickly woman coughs close to them does he realize that the dust mask his child is wearing is probably not enough. The level of panic over this much-deadlier disease doesn't come close to the precautions most people in this country are currently taking.

No one ever mentioned toilet paper shortages

One of the first issues that boiled to the surface in a pandemic-stricken America was the immediate lack of toilet paper. Photos littered social media of empty paper product shelves and grocery chains announced purchase limits. "Contagion" simply did not foresee the immediate connection from virus to worries about toilet paper supplies and, frankly, that kind of warning would have come in handy.

The "Contagion" virus came from China, but no one was called racist for saying so

Even in the Hollywood world, which has been largely supported by money from China for the last few decades, the virus's origin being named as Hong Kong didn't rattle any political cages. Scientists and epidemiologists portrayed in the movie simply went about their business trying to find out as much as they could about the deadly disease while managing to not call each other "xenophobes," for simply discovering the origin of the virus. What a world of harmony "Contagion" must have taken place in.

Recommended
So, That's What's Keeping the FBI Up at Night Regarding Afghanistan
Matt Vespa

Not one person talked about how boring quarantine is

It's difficult to convey in under two hours just how slowly time passes when trapped almost entirely inside your home but there was no inclination that a week could feel like the better part of year. Under the suspenseful score of the film, the urgency and progression of the story seemed to span about 30 tremendously dramatic days, leaving no time to wonder what to do.

The difference between the movie and reality is perhaps most notable in this way. Yes, the Wuhan coronavirus is quite dramatic in real life and causes a lot of anxiety but days on top of days in sweatpants with no end in sight are a far cry from the tick tock nature of what was promised to us by "Contagion."

Despite the differences, however, this movie got much closer to pandemic reality than any of its predecessors. One of the consulting doctors on the film even contracted COVID-19 saying his experience with the real-life illness was "miserable." But like all movies, "Contagion" failed to predict the human element of widespread social panic and left many of us scrambling for toilet paper, pointing fingers of blame, and rage tweeting in our bathrobes. It could be time to reconsider whether John McClane will even save us if we're ever attacked by West German radicals.

Share this on Facebook
Tweet
Why is AOC Sobbing on the House Floor?
Katie Pavlich
So, That's What's Keeping the FBI Up at Night Regarding Afghanistan
Matt Vespa
Want to Guess What's Wrong With VICE News' Article About COVID?
Matt Vespa
House Dem Condemns Tlaib's Anti-Semitic Remarks
Reagan McCarthy
A New Hunter Biden Deal Has Been Revealed…in Libya
Katie Pavlich
I Mean, A Democrat Would Say That When Caught Violating Their Own COVID Edicts
Matt Vespa
CARTOONS | AF Branco
View Cartoon
Most Popular