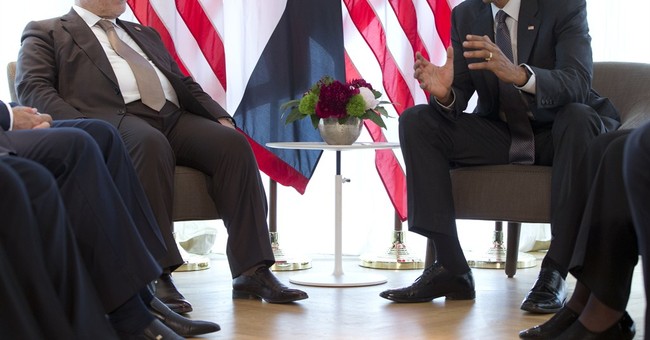 President Obama has been in Germany for the past several days attending the G7 Summit. On Monday, he hosted a press conference in Bavaria, addressing questions, among other things, about what the United States and its allies can do to better combat ISIL.

“We have made significant progress in pushing back ISIL from areas in which they had occupied, or disrupted, local populations,” he began. “But we’ve also seen areas, like in Ramadi, [where] they’re displaced in one place, and they come back in another.”

“So one of the areas where we’re going to have to improve is the speed at which we’re training Iraqi forces,” he continued. “Where we’ve trained Iraqi forces directly and equipped them—and we have a train and assist posture—they operate effectively. Where we haven’t, morale, lack of equipment, etc. may undermine the effectiveness of Iraqi security forces. So we want to get more Iraqi security forces trained, fresh, well-equipped, and focused.”

He added that when the Pentagon finally tenders him a workable blueprint to implement this strategic outcome, he would share it with the country.

However, he also emphasized that a more effective way to defeat ISIS is to disrupt and curtail their recruitment efforts.

“The other area [where] we got to make a lot more progress in is stemming the flow of foreign fighters,” he said. “We’ve made some progress, but not enough. We are still seeing thousands of foreign fighters flowing into Syria, and oftentimes ultimately into Iraq. Not all of that is preventable, but a lot of that is—if we got better corporation, better coordination, better intelligence.”

“If we can cut off some of that foreign fighter flow, then [we’d be] able to isolate and wear out ISIL forces that are already there,” he added. “But if they’re being replenished, it doesn’t solve the problem over the long-term.”

DOJ Turns Over More Flynn Docs, But Where’s the Memo Exonerating Him Before of this Legal Fiasco Began?
Matt Vespa
Joe Biden Says Police Have 'Become the Enemy,' 'Absolutely' Should Defund Them
Katie Pavlich
Kaepernick Cashes In: Bashing America Is Now a Lucrative American Business Model
Guy Benson
NYPD Speaks Out About Having Their Powers 'Taken Away'
Cortney O'Brien
CDC Director: Our Guidelines Shouldn't Be Used as a Reason to Keep Schools Closed
Katie Pavlich
Chelsea Handler Says She Would Scream at People Watching Fox News in the Airport
Julio Rosas
CARTOONS | Al Goodwyn
View Cartoon
Most Popular