Biden to Annapolis Grads: You Are the Real One Percent 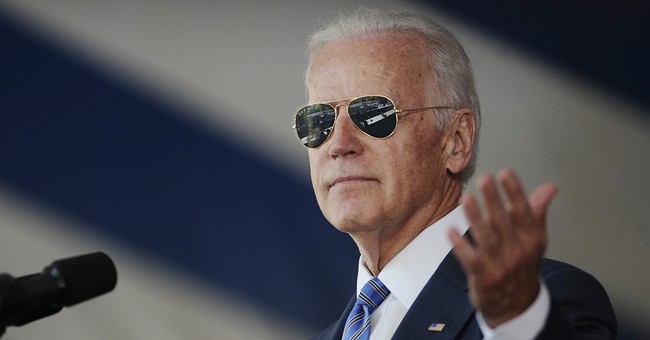 During his speech, which lasted some 30 minutes, he alternated between light-hearted jokes about the daily grind of being a cadet, and bringing attention to the seriousness and importance of the occasion.

“Class of 2015, you were among the most promising high school students on the planet,” he said. “No one would have blamed you for choosing an easier path. But you chose service. You chose honor. You chose to join the real one percent that protects the 99 percent of the rest of us here in America.”

“Today, you graduate from one of the most venerated military and academic institutions on the entire earth,” he continued. “You spent your summer abroad on real ships rather than at internships, and the specter of living in your parents basement after graduation day is not likely to be your biggest concern.”

More seriously, however, he heralded the sacrifices the soon-to-be-commissioned officers were making, both personally and professionally, by joining the United States Navy. But at the same time, he reminded them that such a career path—while honorable—does not come without grave responsibilities.

“We, your fellow Americans, expect a great deal from you,” he intoned. “Not just your physical courage, but your moral courage as well, which at times can be even harder to muster. [As] officers in the United States military, you must demand that every one of your fellow sailors and marines is afforded the dignity—and respect—that they deserve, no matter their race, gender, faith, or sexual orientation.”

“As leaders of the United States Navy, we count on you to refuse to tolerate sexual harassment or sexual assault in any form—under any circumstances,” he added. “It’s a matter of honor that you prevent that.”

But, he said, more will also be required of Annapolis graduates and officers.

After all, many will soon find themselves in harm’s way.

“I have been in and out of Afghanistan and Iraq over 27 times,” he announced. “Thirty-five thousand of you marines—and 5,000 sailors—at this moment are deployed ashore in conflict areas.”

“You are everywhere,” he declared.

Finally, while he noted that the life all cadets choose for themselves is both dangerous and unglamorous, their service and training is needed now more than ever.

“You remain indispensable,” he said. “America’s command of the oceans is the measure and the symbol of our diplomatic and military primacy in the world. As George Washington remarked during the Revolutionary War, ‘It follows then as certain, as the night succeeds day, that without a decisive naval force, we can do nothing definitive, and with it, everything honorable and glorious.’ That hasn’t changed one single bit.”