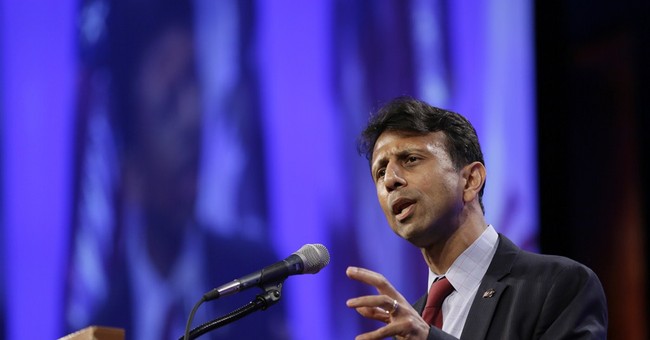 And by “in,” I mean he’s officially launched a presidential exploratory committee, which is as strong an indication as any that he’s running for president in 2016.

In a press release circulated early Monday afternoon, the Louisiana governor outlined the timeline for his announcement, and listed some of the reasons why he is seriously contemplating entering the race.

"For some time now, my wife Supriya and I have been thinking and praying about whether to run for the Presidency of our great nation,” he said. “We'll make a final decision in June, after the legislative session in Louisiana ends.”

Naturally, he also reserved some particularly harsh words for President Obama, whom he believes is transforming America into another European welfare state.

"President Obama has started to redefine the American Dream, turning it into the European Nightmare,” he declared. “Because of this, I believe our country is in serious trouble and that the hour is late for America."

"Economic collapse is much closer to the door than people realize, our culture is decaying at a rapid rate, and our standing in a dangerous world is at an all-time low,” he added.

With that in mind, he outlined some of the specific policy proposals he would champion if and when he is a candidate for president of the United States.

"While other Republican leaders are talking about change, I've published detailed plans to repeal and replace Obamacare, rebuild America's Defenses, make America energy independent, and reform Education for our nation's children,” he stated. "So today I’m announcing the launch of an exploratory committee, which will help me to decide whether to seek our party's nomination."