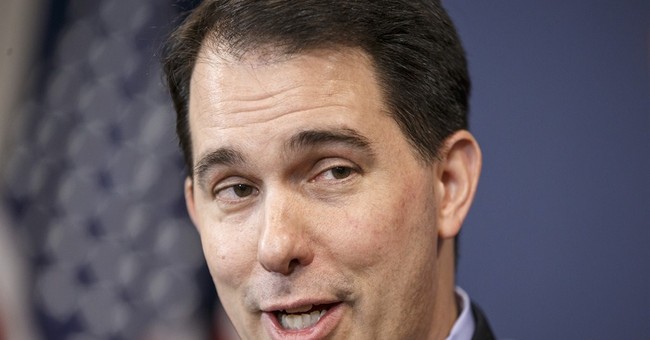 The media wants to discredit Gov. Scott Walker (R-WI) as early and often as possible, as he poses a direct threat to the eventual Democratic presidential nominee. But in spite of their efforts, he’s cruising in the polls. Consider, for instance, this hot-off-the-press University of Texas/Texas Tribute survey, which shows the Wisconsin governor nipping at the heels of Sen. Ted Cruz (R-TX)...in Texas.

Cruz, for his part, is not just some ordinary guy from the Lone Star State, either; he’s actively testing the waters in preparation for a likely presidential run. Thus, from Iowa to Alamo country, the Walker Express is in full throttle and leaving pretty much everyone else in its wake: Wisconsin Gov. Scott Walker has erased U.S. Sen. Ted Cruz’s strong lead among Texas Republicans in the volatile and still-developing race for the party’s 2016 presidential nomination, according to the latest University of Texas/Texas Tribune Poll.

Cruz’s 25 percentage-point lead over Walker in October has vanished: The Texan won the support of 20 percent of the state’s registered voters to Walker’s 19 percent — a statistical tie. Former Florida Gov. Jeb Bush and author Ben Carson were tied at 9 percent, and former Texas Gov. Rick Perry was next at 8 percent.

Can there be any doubt now that Scott Walker is the frontrunner? Heck, if he’s as popular as Ted Cruz in Texas of all places, he must be doing something right, no? Granted, I’m writing this 11 months before primarygoers head to the polls (that might as well be political eternity) and Gov. Walker is hardly averse to expressing his social and religious conservatism. Of course Texans like him. But is it not also significant that a blue state governor is essentially tied with Ted Cruz, and is leading the state’s popular, longtime ex-governor by more than double digits? By comparison, Gov. Chris Christie (R-NJ), another liberal state governor, barely makes a splash in this poll.

By the way, my colleagues Guy Benson and Mary Katharine Ham recently interviewed Walker for their forthcoming new book, End of Discussion. As he made clear in that interview, he’s figured out a way to speak directly to his constituents, outside the distorting influence and unreliable filter of the American media.

It appears his message has now made it all the way to Texas.