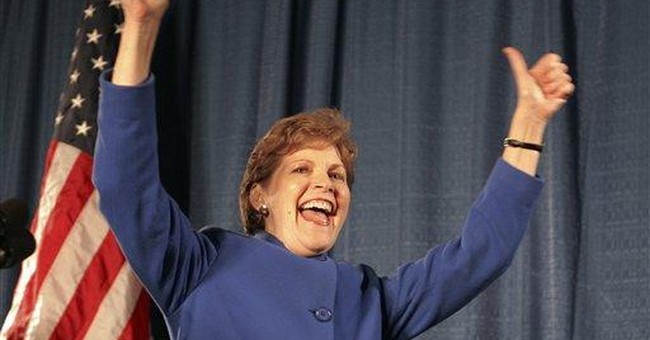 Certainly, the Brown campaign has insinuated as much. The Boston Herald has the scoop:

Democratic incumbent Jeanne Shaheen and GOP challenger Scott Brown yesterday engaged in long-distance warfare in their U.S. Senate battle as Shaheen launched a new attack on Brown but refused to do it face-to-face. Brown, the former Massachusetts senator, appeared at Franklin Pierce University for what was originally slated as a Senate faceoff, one of several election debates co-sponsored by the Marlin Fitzwater Center for Communication, but he ended up being alone on stage because Shaheen had declined to show up.

“I am disappointed,” Brown said in a talk to first-time voters. Shaheen also is refusing to appear on stage with Brown in another planned debate next month sponsored by the Manchester and Nashua Chambers of Commerce, debate organizers reportedly confirmed yesterday.

In fairness, Team Shaheen maintains they declined the invitation to debate yesterday -- and next month -- because they have already acquiesced to three separate, state-televised debates before voters cast their ballots. So it's not as if the New Hampshire Democrat is totally running scared and hiding from the public. Voters, for their part, will ultimately decide whether she is or not.

On the other hand, her refusal to host open (i.e., non-"telephone") town hall-style meetings -- or agree to more debates, as the Brown camp has proposed -- is telling. Perhaps voting with the president 98 percent of the time, supporting amnesty, and distinguishing herself as the deciding vote for Obamacare are facts that can be better hidden by shunning the limelight.

By no means, however, is Shaheen the only Senate Democrat avoiding public debates. Other vulnerable incumbents have boldly followed suit, one of whom experienced some rather ugly and embarrassing headlines in his hometown newspaper for doing so.

Still, maybe Senate Democrats believe infuriating their constituents is a price worth paying to avoid tough questions. But even if it is, such strategies rarely go unnoticed.