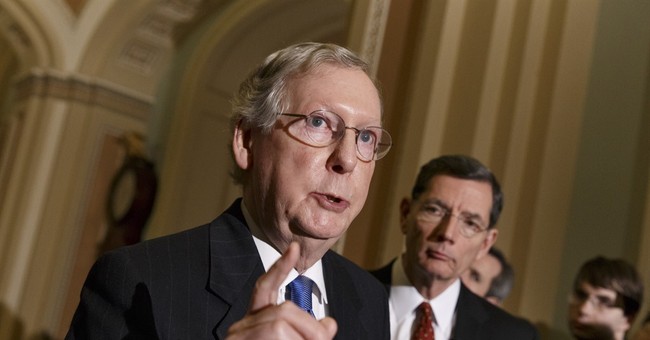 Election Day is still several months away, and yet Republicans in two crimson states are already widening the gap in their respective races, according to two separate and freshly-released NBC News/Marist polls.

In Kentucky, Senate Minority Leader Mitch McConnell, R-Ky., is ahead of Democratic challenger Alison Lundergan Grimes by eight points among likely voters, 47 percent to 39 percent, with Libertarian David Patterson getting another 8 percent.

These two new polls suggest, in other words, that both candidates have established themselves as bonafide front-runners in their home states. (We’d need to see additional in-state polling to actually confirm this). And yet this is a remarkable turn-around for both Republicans candidates, considering how stubbornly and consistently close these two races have been all summer. Interestingly, though, the president’s job approval rating in Kentucky and Arkansas sits at...31 percent. This, of course, is almost certainly dragging down progressive candidates, including Pryor and Grimes, running for office in those two states.

Nonetheless, on the other side of the country, incumbent Sen. Mark Udall (D-CO) still holds a modest lead over his opponent, the pollsters found:

But it’s a different story in Colorado. Udall’s six-point lead over Gardner among likely voters turns into an eight-point advantage among registered voters, 48 percent to 40 percent.

What’s more, Obama’s job-approval rating in Colorado – at 39 percent – is slightly higher than it is in Arkansas and Kentucky.

And that, in turn, is perhaps one reason why Udall is still comfortably ahead.

For now, that is.