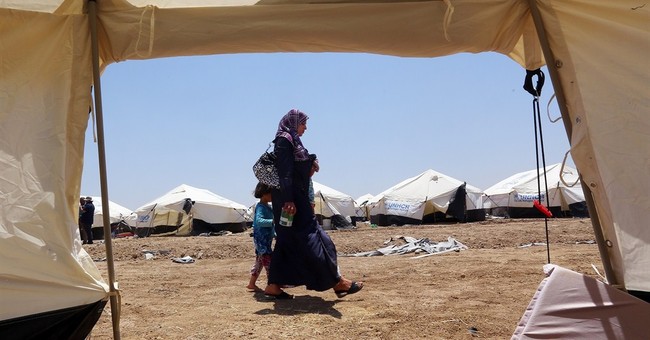 The Islamic State (IS) is determined to reestablish an Islamic Caliphate across the Middle East. And what’s more, in pursuit of their agenda, the terrorist organization has adopted “convert or die” as its mantra. The Yazidis, in particular, have been specifically and ruthlessly targeted by IS for extermination. Current figures estimate that some 500 Yazidi refugees have already been slaughtered since the crisis first began.

But the terrorist group’s propensity for barbarism is not merely exposed by their bloodlust and ideology. There have also been reports that many of these jihadists are kidnapping young girls and keeping them as sex slaves for themselves, or profiting off their innocence. Many of these reports are unsubstantiated, of course. But the anguish of one father who recently learned that his daughter will soon be sold into slavery underscores the depravity of IS and its evil tactics (via The Guardian):

For the past week, Khandhar Kaliph's hands have trembled whenever his phone has rung.

He nervously greeted his daughter, who had been kidnapped when the Islamic State (Isis) overran the Yazidi city of Sinjar. There was a minute of silence, before he broke down sobbing.

"She said she is going to be sold as a slave this afternoon, for $10," Kaliph said, his tears dropping into the brown dust. "What can a father say to that. How can I help? We all feel so useless."

Kaliph's daughter, who he did not want to name, had access to a group phone passed around between other girls imprisoned by the Islamic State in Bardoush prison in central Mosul.

All face the imminent prospect of being married off. Or worse, being used by the jihadis as a sex slave.

Those of us in the Western world can only read these reports with horror and revulsion. This is evil personified. And yet the White House maintains that the U.S. is not in an open state of war with these extremists.

Strictly speaking, I suppose, that might be true, but can there be any doubt that IS is at war with us, and with all humanity?