Pope Francis: A Year in Review 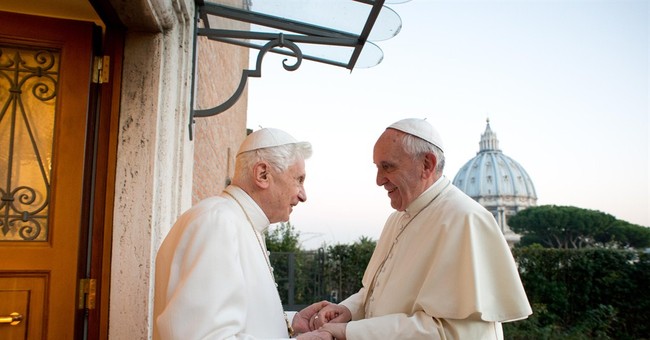 One year ago today white smoke filled the skies above St. Peter’s Basilica; the College of Cardinals, the world would later learn, had elected Cardinal Jorge Mario Bergoglio, the then-archbishop of Buenos Aires, to succeed Pope Benedict XVI as Supreme Pontiff and leader of the Holy Roman Catholic Church.

Instead of marking his one year anniversary with pomp and circumstance, however, Francis eschewed celebrations altogether and made a humble request to the laity:

Please pray for me.

A bit of context:

Francis' appeal Thursday echoed his gesture on that rainy night one year ago when he came out onto the balcony of St. Peter's Basilica and introduced himself to the world. Rather than impart a blessing on the crowd below him, Francis asked first for a "favor" from the crowd, bowing his head and asking for the crowd to bless him.

Francis has continued to ask for prayers, ending nearly each appearance with a similar request.

Francis was spending his anniversary tucked away on retreat south of Rome with senior Vatican cardinals and monsignors. The Vatican said nothing special was planned for his anniversary during the retreat, just prayer.

Of course, most American Catholics approve of Pope Francis. But unlike his predecessor, western mainstream media outlets have also embraced and celebrated his papacy -- he appeared on the covers of both Time Magazine and Rolling Stone -- although perhaps for the wrong reasons. Nevertheless, Pope Francis has undeniably improved the Church’s image, in ways unimaginable even a year ago. Columnist E.J. Dionne explains:

The most important aspect of a Pew survey released this month was not its finding that 68 percent of U.S. Catholics thought Francis was changing the church for the better, or that 76 percent said he was doing a good or excellent job of addressing the needs and concerns of the poor. No, the truly revealing fact about this study is that it did not even occur to Pew’s pollsters to ask in their benchmark poll a year ago whether poverty should be a priority of the new pope. This is no knock on Pew; the fact that its researchers had to include a new question about poverty this year shows how much Francis has transformed the church.

James Martin, a priest in the Jesuit order, expanded on this theme at CNN by writing that Francis’ humility is obviously one of the many reasons why he is so revered in the media, and indeed, one of the most popular leaders in the world:

Humility. Is there anyone who has not noticed Francis' humility? His first public gesture as Pope was not to bless the vast crowd in St. Peter's Square but to request the crowd's blessing. A few days later, he turned down the traditional papal digs in the grand Apostolic Palace in favor of a modest suite at a Vatican guesthouse.

Just this week, a photo taken of members of the Vatican staff on their annual retreat showed the Pope seated in their midst, along with the other bishops and cardinals, as just another person on retreat.

Humility of course is a Christian virtue, but it is also something that St. Ignatius Loyola, the 16th-century founder of the Jesuits, specifically asked Jesuit priests and brothers to embrace. There are three kinds of humility, St. Ignatius said. The first is exemplified by the person who does nothing immoral. The second is the one who, when faced with honor or dishonor, is "indifferent." The third is the person who chooses the humbler path, to be more like Jesus. Pope Francis exemplifies this "Third Degree of Humility."

Humility, however, is not what defines Francis’ papacy nor will it define it. The Catholic scholar George Weigel writes at National Review Online that while these “symbolic aspects” are heavily covered in the media -- and modestly important, too, he argues -- it’s important to remember that the unglamorous reforms Francis is instituting behind-the-scenes is what really counts:

For all his high media profile throughout the world, Pope Francis is actually committed to a certain downsizing of the papacy. His recent complaint about the image of the pope as “Superman,” in an interview with the Italian daily Corriere della Sera, is not simply a matter of Bergoglio’s objecting to journalists’ turning him into something he knows he isn’t; it reflects his sense that, when the pope is the sole center of attention in matters Catholic, all others are getting a pass on their evangelical responsibilities. Much attention has been paid, over the past year, to what are essentially symbolic aspects of this papal downsizing: Francis’s residence in what was once known in media-speak as “the five-star Vatican hotel” but is now habitually referred to as the “humble Vatican guesthouse”; his more spare approach to papal liturgy; the simplicity of his ring and pectoral cross; his use of a Ford rather than a Mercedes. These things have their (modest) importance. But what really counts are the things that are rarely noted, much less commented upon: the dramatic decline in the role of the pope’s personal secretary, which had grown exponentially in recent pontificates; the pope’s insistence that, while he is the decider, things to be decided must be thrashed out thoroughly and openly before he decides, and that the thrashing must go on with him present, primus inter pares, but by no means the only voice in the debate; his willingness to hear correction, and to change because of it; his determination to make the world synod of bishops something more than a platform for enervating episcopal rhetoric.

There is a temptation in many of us to speak only of Pope Francis’ humility and modesty; his love for and commitment to the poor, the forgotten, and the unborn. These are attributes everyone talks about, and celebrates. But what matters also, I think, as Weigel wants us to understand, is that Pope Francis is very much his own man. He will evangelize and spread the "Good News" -- as "a son of the Church" and with God's grace -- as best he can, even if traditionalists and conservative Catholics alike find his methods unsettling:

Jorge Mario Bergoglio is a very old-school Jesuit, and it’s clear that, as such, he is going to be pope his way, not anyone else’s — which is a matter not of ego but of the kind of classic Ignatian religious formation (stressing a stringent, ongoing, personal discernment of God’s will) that once prepared 17th-century European intellectuals to paddle canoes up Lake Huron, thousands of miles from civilization, in search of converts among the native tribes. As he has said on numerous occasions, he is a son of the Church, who believes and teaches what the Church believes and teaches. He is going to give voice to those convictions, sometimes, in ways that surprise, even shock.

This, I suspect, is part of Pope Francis’ appeal. And the very reason why so many of us will be paying very close attention to him in the years ahead.