McCain: That Poll Showing My Job Approval Rating at 30 Percent is "Bogus" 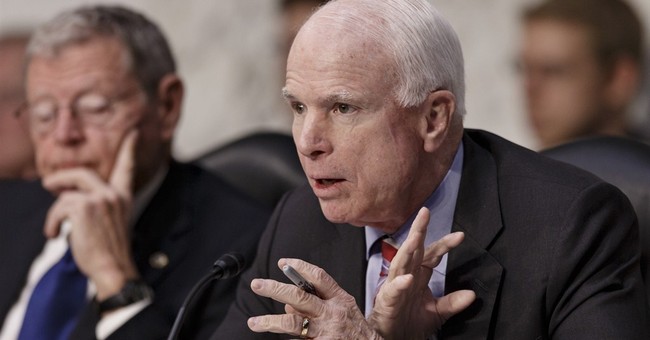 The specific survey he’s referring to was conducted by Public Policy Polling (PPP) several weeks ago, and of course, the results were worrisome for an incumbent senator contemplating running for re-election. In fairness to the Maverick, though, PPP is a Democratic-leaning polling firm.

However, listening to anecdotal evidence is hardly the best way to accurately measure public opinion. Reviewing empirical data is:

McCain took issue with PPP’s findings yesterday on the Fox Business Channel, of course. You see, he’s been traveling around Arizona interacting with his many adoring constituents. Thus, he knows they still “like” him, or something. The Hill caught the transcript:

Sen. John McCain (R-Ariz.) called a poll that finds he has a 30 percent job approval in Arizona “bogus” on Monday.

“There is a bogus poll out there,” McCain said on Fox Business’ “Cavuto.” “I can sense the people of my state. When I travel around, which I do constantly, they like me, and I am very grateful.”

McCain can contest the results of this poll all he wants. And it's possible the survey is inaccurate. But it’s important to remember that PPP predicted, with remarkable accuracy, the results of the 2012 election at both the presidential and state levels (via Politico):

In every swing state, its final presidential polls were validated Tuesday night as PPP reported the correct winner in all 9 battlegrounds and in the 3 other states (Michigan, Minnesota, and Pennsylvania) that the Romney campaign feinted toward. …

The story in the Senate was much the same for PPP. It correctly picked every winner and, in most cases, slightly understated Democratic support and overstated GOP support.

All this is to say that PPP’s findings are probably correct. In fact, PPP’s figures might actually deliver encouraging news to Team McCain, if you can believe it. For instance, an in-state, Rocky Mountain poll conducted about a year ago showed that the senior senator from Arizona was boasting his lowest approval rating in more than two decades (26 percent), while at the same time, only 21 percent of respondents said he deserved to be re-elected. Ouch. As the president of PPP put it last week in their firm’s findings, “The low opinion both Republicans and Democrats have of John McCain now means he could be vulnerable in both the primary and the general election next time around.”

That's something no incumbent senator ever wants to hear. But living in denial, I suspect, is no way to win re-election, either.