Oh My: Putin's Name Put Forth For Nobel Peace Prize 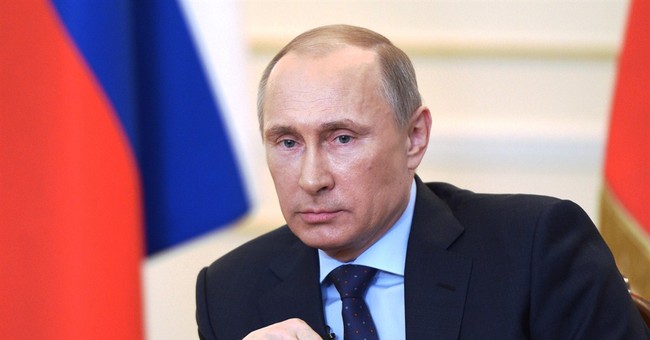 Yes, my friends. The same guy who just recently sent troops into a sovereign nation -- a decision he might later come to regret, by the way -- is a candidate for the Nobel Peace Prize:

Russian President Vladimir Putin has been nominated for the 2014 Nobel Peace Prize - but the conflict in Ukraine is also likely to be on the Nobel committee's agenda.

Committee members who met on Tuesday added their own proposals with a focus on recent turmoil around the globe.

Surely many other candidates, if not most, are much more deserving:

Pakistani teenager Malala Yousafzai, shot in the head by the Taliban for advocating girls' right to education, is also thought to be among the candidates, as are several Russian dissidents who have spoken out for human rights.

Conflicts between protesters and the governments of Thailand and Venezuela are also expected to be debated by the committee.

"We are getting an increasing number of nominations from people in countries that have never submitted nominations before," Lundestad said.

Presumably most Nobel Peace Prize recipients spend their lives advancing the cause of social justice, in some way, through peaceful and nonviolent means. Martin Luther King Jr. and Nelson Mandela, of course, are two of the award’s most famous recipients, who lived up to that standard. Imagine, though, if they had to share that award with President Putin, of all people? That strikes me as rather unjust.

That being said, the number of people eligible to nominate candidates is virtually limitless. Thus, one wonders if in a stunning act of hubris, President Putin merely flexed his muscles and ordered one of his henchmen to put his name forward:

Although nominations are kept secret for 50 years, thousands of people around the world are eligible to propose candidates, including any member of any national assembly, and many make their picks public.

The committee narrowed its list to between 25 and 40 on Tuesday and it will cut its list to about a dozen by the end of April.

Will more belligerence from Moscow affect the committee’s decision? Let’s hope so.