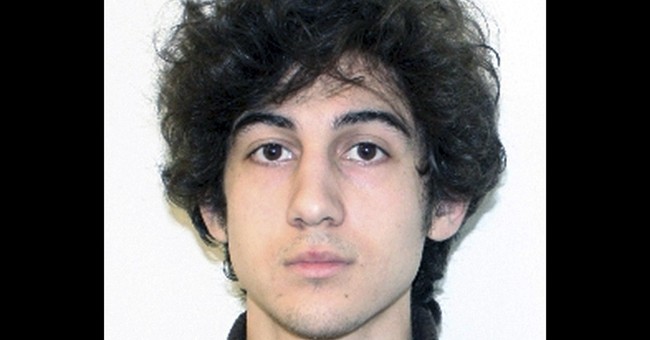 And they will. Last April two terrorists bombed my hometown city of Boston during the annual marathon festivities. Three people were killed when two bombs exploded near the finish line -- including an 8-year-old boy -- and hundreds of others were wounded. Today, however, Attorney General Eric Holder has announced he’s green lighted federal prosecutors to charge Dzhokar Tsarnaev -- the only surviving suspect who allegedly participated in the attack -- with the death penalty. The Boston Globe has more:

US Attorney General Eric H. Holder Jr. has authorized federal prosecutors to seek the death penalty for Dzhokhar Tsarnaev, the young man accused in the Boston Marathon bombings in April that killed three people and injured more than 260 others.

“After consideration of the relevant facts, the applicable regulations and the submissions made by the defendant’s counsel, I have determined that the United States will seek the death penalty in this matter. The nature of the conduct at issue and the resultant harm compel this decision,” Holder said in a statement.

Prosecutors notified a federal judge in Boston today of the decision.

“We support this decision and the trial team is prepared to move forward with the prosecution,” Boston US Attorney Carmen M. Ortiz said in a statement.

The polling, meanwhile, about whether or not Tsarnaev should face the death penalty if convicted, is somewhat split in Massachusetts. That said, a solid plurality of Bay State respondents believe he should be executed:

A Globe poll in September showed that 57 percent of Massachusetts respondents supported a life sentence for Tsarnaev, compared with 33 percent who favored the death penalty. The Boston Bar Association made a public declaration earlier this month in opposition of the death penalty, saying it only offered the “illusion of ultimate punishment.” The group noted that death penalties, even when granted, are rarely carried out.

Since the federal laws were enacted in 1988, only three people have been executed, according to Federal Death Penalty Resource Counsel.

For what it’s worth, federal prosecutors also gave victims and their families a chance to weigh in on the charges. Here was one mother’s reaction whose two children were wounded in the attacks:

Before Holder’s decision was announced, Liz Norden of Stoneham, whose two sons each lost a leg in the Marathon blasts, said she wanted prosecutors to seek the death penalty. She said all of the victims were given an opportunity last year to give their input on whether prosecutors should seek the penalty.

“My life – my kids’ lives – have been changed forever,” said Norden, who was speaking for herself and not her sons, J.P. and Paul. She said she has always been a supporter of the death penalty for particularly heinous crimes, and she will be disappointed if the government ultimately allows a plea bargain enabling Tsarnaev to get life without parole. She sees no reason the government should waste money keeping him alive in prison for decades before he dies.

This is a politically charged and divisive debate. My parting question: Should this man -- who was caught on camera at the scene of the crime carrying a backpack reportedly filled with the lethal explosives -- spend the rest of his life in prison if convicted? Or should he be put to death by the state? Feel free to leave your thoughts and opinions in the comments box below…