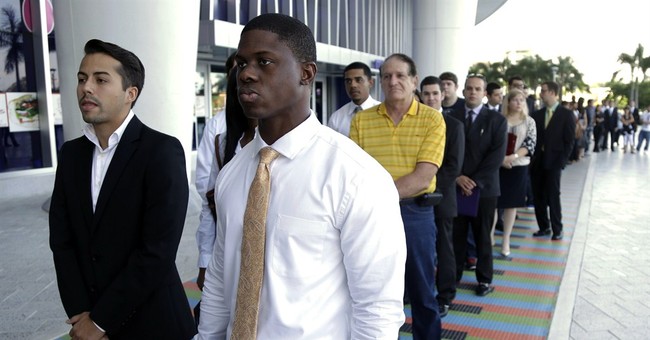 Concerns over the security and functionality of the exchanges aside, the president’s health care law is directly and solely responsible for the loss of 1,000 jobs in West Michigan, according to a new study:

A new report out Thursday by Grand Valley State University found that there are at least 1,000 fewer jobs in West Michigan as a result of the Affordable Care Act, more commonly referred to as Obamacare.

The report was conducted by GVSU economics professors Leslie Muller and Paul Isely in collaboration with Priority Heath. A survey was sent to local businesses with more than 50 employers in Allegan, Kent, Muskegon and Ottawa counties.

"Firms are actually holding off on hiring or their reducing their hiring that they were thinking they were going to be doing because of the ACA," said Muller.

The 1,000 jobs lost does not include the number of workers in West Michigan that have lost hours to ensure that they are kept as part-time employees. Nearly one-third of companies said they have cut employees' hours.

A thousand fewer jobs in the area; plus, one-third of employees now have had their hours cut. Devastating. That means if the Affordable Care didn’t pass, a thousand more Americans would be employed and countless others would be working full-time. This is only a small section of the United States, too. I’ll leave you with this exit quotation from the piece: