Egyptians Head to the Polls 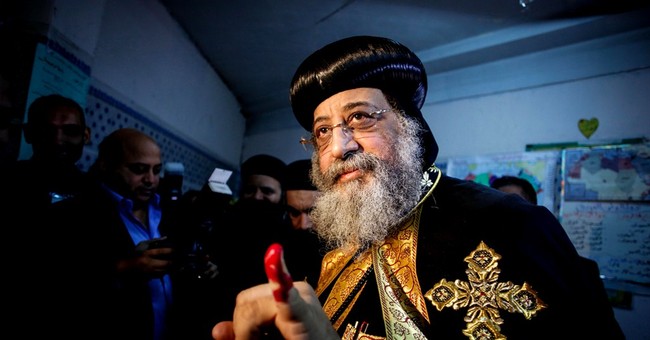 Mohamed Morsi is in prison, the Muslim Brotherhood has been branded a terrorist group, and the people of Egypt are heading to the polls to vote on a new constitution:

Egyptians formed long lines Tuesday at polling stations across much of the country to vote on a new constitution that represents a key milestone in a military-backed roadmap put in place after the ouster of Egypt's Islamist president in a coup last July.

The transition of the past three years, after former President Hosni Mubarak was removed from power following popular protests in early 2011, have left the Arab world's most populous nation sharply divided between supporters of the Muslim Brotherhood in one camp, and the military, security forces and their supporters in the other. This week's vote is being carried out under tightened security and fears of attacks.

Not unexpectedly, there have already been several incidents:

Shortly before polls opened, an explosion struck a Cairo courthouse, damaging its facade and shattering windows in nearby buildings but causing no casualties in the densely populated neighborhood of Imbaba — a Brotherhood stronghold.

Brotherhood supporters also clashed with security forces in several provinces around the country, with one Morsi supporter shot to death when he and about 100 others tried to storm a polling station south of Cairo, officials said. They were speaking on condition of anonymity because they were not authorized to talk to the media.

Actually, Fox News reports that no less than four people have already been killed thus far:

Egyptian security officials say clashes between police and protesters loyal to former President Mohammed Morsi have left at least four people dead on the first day of a vote on Egypt’s new constitution.

The clashes began hours after Egyptians began voting on the new charter that represents a key milestone in a military-backed roadmap put in place since the ouster of Morsi last July.

Three people were killed when gunfire broke out between police and gunmen on rooftops during a pro-Morsi rally in the southern city of Sohag, security officials told The Associated Press.

I suppose this bloody spectacle is only to be expected. For what it's worth, the voting process is a two day affair, and “the third referendum in three years,” reports the NYT.

But is this so-called “referendum” really free and democratic? Er:

Hundreds of thousands of fliers, posters, banners and billboards urged Egyptians to vote "yes." Posters and campaigns urging a "no" vote have led to arrests. …

Among scores of voters interviewed by The Associated Press by midday Tuesday, no one said they had voted against the charter.

It seems that those who don't support the charter were more inclined to abstain from voting -- rather than roll the dice:

There was a lone voice of dissent outside another polling station in Assiut.

"El-Sissi is a killer and his constitution is void," shouted a woman, who left the scene just before a security team arrived to look for her. At a nearby outdoor market, Hany Abdel-Hakeem was arguing with a vendor.

"This constitution is not built on legitimacy and I am boycotting the vote," he said. "I will not participate in anything I am not convinced of. And if I say anything against it, I will be arrested. Keeping silent is better."

A successful turnout is expected to open the door for Abdel-Fattah el-Sissi, who is the country's top general, to run for president. (He actually said he would if urged to by "popular demand.") But whether or not he will prove to be a more effective president than his predecessor, if he does run and win, remains to be seen.

UPDATE: The Washington Post editorial board on Monday called for not re-authorizing all U.S. foreign aid to Egypt, citing the country's "bogus democracy" as the reason. Thoughts?