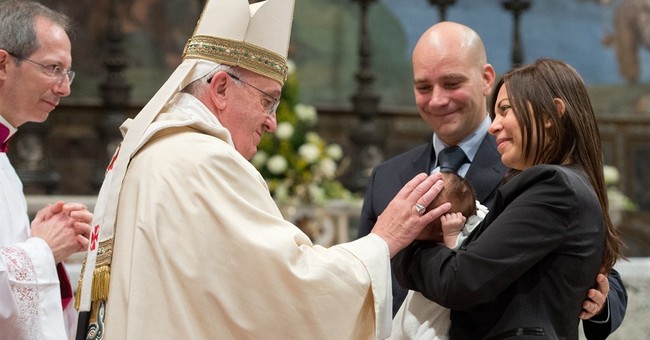 The Bishop of Rome is pro-life, and would not have been elected Supreme Pontiff if he was not. But in some circles, some seem to think he supports abortion rights. This is simply untrue.

Pope Francis has said in the past he is a “son of the Church,” and therefore believes in its teachings, but on Monday he (again) made it crystal-clear where he stands on right-to-life issues:

Pope Francis on Monday criticized abortion as evidence of a "throwaway culture" that wastes people as well as food, saying such a mentality is a threat to world peace.

Francis also urged better respect for migrants and denounced the persecution of Christians in Asia, Africa and the Middle East in his global survey of world crises delivered to diplomats accredited to the Holy See.

Saying hunger is a threat to world peace, he noted that not only food but human beings themselves are often discarded as unnecessary.

"We cannot be indifferent to those suffering from hunger, especially children, when we think of how much food is wasted every day in many parts of the world immersed in what I have often termed 'the throwaway culture,'" Francis said.

This message seems to echo what Mother Theresa said at the National Prayer Breakfast in 1994; namely, abortion is “the greatest destroyer of peace today.” Francis merely expanded on this powerful theme:

"For example, it is frightful even to think that there are children, victims of abortion, who will never see the light of day," he said. Francis has generally limited his exhortations about abortion, saying church teaching is well known and that he prefers to speak less about the church's moralizing rules and more about its positive, welcoming message.

In remarks that were less diplomatic and more a reflection of his own priorities, Francis called for the elderly to be treated with respect that their wisdom warrants, and for children to be protected from exploitation, slavery and hunger.

This isn’t really a story per se. But because Francis won Time Magazine’s “Person of the Year” award -- presumably in part because he is believed to be more "liberal" than, say, his predecessor -- it’s worth reiterating the fact that Francis himself is pro-life. Indeed, on matters related to the Magisterium, there is no discernible difference Pope Francis and Pope Benedict that I can see. And his most recent remarks on abortion, I think, only proves that to be the case.