Poll: And the Most Unpopular Military Conflict in U.S. History is… 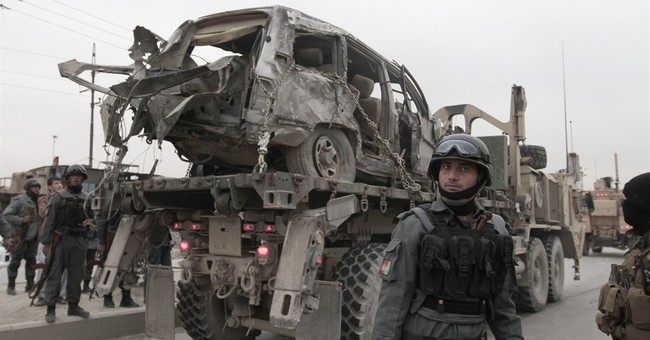 …the war in Afghanistan?

Support for the war in Afghanistan has dipped below 20%, according to a new national poll, making the country's longest military conflict arguably its most unpopular one as well.

The CNN/ORC International survey released Monday also indicates that a majority of Americans would like to see U.S. troops pull out of Afghanistan before the December 2014 deadline.

"Those numbers show the war in Afghanistan with far less support than other conflicts," CNN Polling Director Keating Holland said. "Opposition to the Iraq war never got higher than 69% in CNN polling while U.S. troops were in that country, and while the Vietnam War was in progress, no more than six in 10 ever told Gallup's interviewers that war was a mistake."

That’s to say, Americans never opposed the wars in Vietnam and Iraq as forcefully as they now oppose the war in Afghanistan. Interesting. Remember, the former two wars engendered mass protests and political demonstrations. Both LBJ and Bush 43 were routinely labeled war criminals, too, and were criticized incessantly for the way in which they handled the conflicts that consumed their presidencies. And yet the war in Afghanistan may yet prove to be the most unpopular war in American history. More than 2,000 American service members have died fighting there -- a grievous amount, to be sure, but far less than the casualties in Vietnam (58,000) and Iraq (4,800). So why is this war more unpopular? It could be that after 12 years of fighting, the public is just so weary and so sick of war that virtually everyone wants to bring the conflict to a close as soon as humanly possible. It's time to focus on domestic affairs, etc. As the pollsters note, too, the war in Afghanistan began under a Republican administration -- but was continued and prosecuted more vigorously during the Obama years. Both parties, then, it can be said, are to blame for the war’s duration and costs, which might explain why Americans (especially non-party affiliated voters) now overwhelmingly support bringing all our troops home as early as next year, as originally planned.