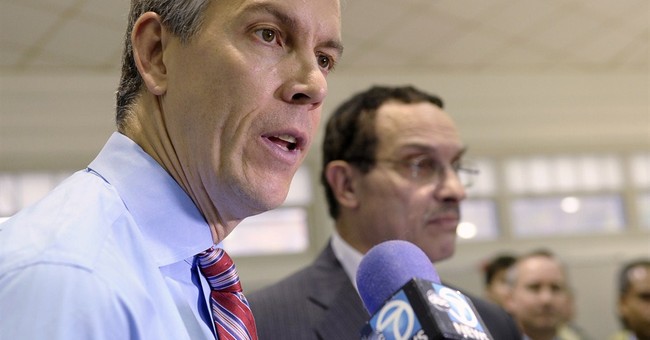 The proper and most effective way to fix America’s education system has baffled reformers, school administrators, and government officials for decades. What is clear, however, is that compared to many other nations, U.S. teenagers are hardly where they can and should be. In fact, according to the results of an international exam released this week (in which more than 60 countries participated), 15-year-olds in the U.S. on average failed to finish in the top 20 in any of the three categories tested:

Teens from Asian nations dominated a global exam given to 15-year-olds, while U.S. students showed little improvement and failed to reach the top 20 in math, science or reading, according to test results released Tuesday.

American students scored below the international average in math and about average in science and reading.

The top average scores in each subject came from Shanghai, China's largest city with more than 20 million people. Singapore, South Korea, Japan, and Hong Kong were among the participants with students scoring at the top on average in each subject. Vietnam, which had its students participate for the first time, had a higher average score in math and science than the United States.

The 2012 Program for International Student Assessment (PISA) is conducted every three years by the Organization for Economic Cooperation and Development (OECD) -- roughly half a million students took the test in 2012 -- and it was first conducted in 2000. A closer look at these scores, however, shows just how far American students have to go to catch up to their Asian and European counterparts (via the Washington Post):

On the math portion, 28 countries tested better than the United States. Aside from the Asia powerhouses of Shanghai, Singapore, Hong Kong, Taipei, Korea, Japan, the United States was outscored by a string of European countries including Latvia, the United Kingdom, Poland, France, Germany and Slovenia.

In science, 22 countries posted better results than the United States, including Vietnam, Canada and Poland. In reading, 19 countries had higher scores than U.S. students, including Estonia and Liechtenstein.

Maybe one reason for the stagnation, the OECD concluded, was less-than-rigorous school curriculums:

“Perhaps the application problems that most students encounter today are the worst of all worlds: fake applications that strive to make the mathematics curriculum more palatable, yet do no justice either to modeling or to the pure mathematics involved,” the OECD report said. Providing students with better opportunities to learn will help them develop the skills to make frequent and productive use of math in their work and daily life, it said.

The new Common Core academic standards in math and reading, which have been fully adopted by 45 states and the District of Columbia, could go a long way to pulling up the nation’s PISA scores, according to the OECD. While the standards are now being implemented in most U.S. classrooms, there has been growing political opposition from the right, left and center.

Bottom line: U.S. test scores have flat-lined while other countries -- most notably China, Japan and South Korea -- are off the charts. According to the Post, one expert suggests we should just adopt the strategies working in thriving nations here at home -- while another worries about reading too much into the fine print of an “international” exam. Policy makers therefore will inevitably disagree about what to do, but one thing is clear: American students do not have the skills they need to lead the world in what one hopes will be the next American century. Closing this gap, then, must be a priority. But how we accomplish this is up for debate.