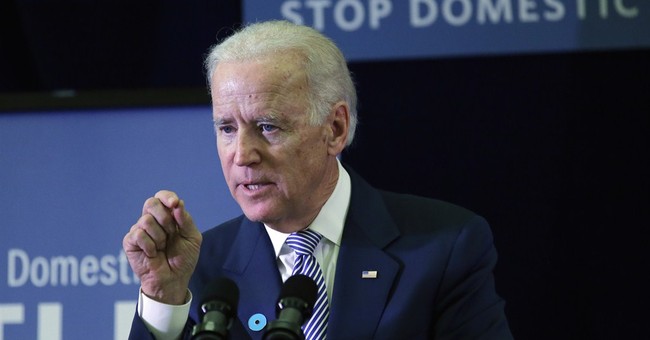 Apparently. That’s according to Mark Halperin and John Heilemann’s forthcoming new book “Double Down,” which hits stores next week.

President Obama’s political advisers secretly explored the possibility of replacing Vice President Biden on the 2012 ticket with then-Secretary of State Hillary Rodham Clinton to capi­tal­ize on her popularity when Obama’s reelection seemed precarious, according to a new book.

In late 2011, a team of Obama’s campaign strategists conducted polling and convened focus groups to explore the political potency of installing Clinton as his running mate, according to “Double Down,” a book about the campaign by journalists Mark Halperin and John Heilemann.

William M. Daley, the White House chief of staff at the time, was the most forceful advocate of exploring the switch, which the authors write was studied by “the top echelon of Obamaworld” and kept secret from the vice president. But the team concluded that adding Clinton “wouldn’t materially improve” Obama’s chances of winning a second term.

Obama adviser David Plouffe, who the book says was part of the small group, tweeted Thursday that the idea of swapping in Clinton was “not even entertained.”

Gaffe-prone but affable, my sense is that if polls showed scrapping Biden from the ticket in favor of Hillary Clinton (or perhaps even Mario Cuomo) gave Team Obama a slight edge on Election Day, they would have done so without hesitation. But they soon realized that the gamble would never have paid off, and ultimately, would have made them looking desperate and weak. So they didn’t do it.

The 2012 presidential race, it can be said, was a landmark election, partly because Obama won even though the employment rate was grossly high, jobs were scarce, and his solutions weren’t working. I think the general consensus on the right, then, among GOP strategists at least, was that Barack Obama was well on his way to becoming a one-term president. All Republicans needed to do, of course, was tout Mitt Romney’s resume and job experience, and everything would be just fine. In the end, however, Republicans greatly underestimated Team Obama’s successful smear campaign and get-out-the-vote initiatives; plus, it didn’t help that Team Romney's insider polling numbers were completely skewed. Ultimately, Obama never needed to can Uncle Joe to keep his job. His presence on the ticket was a non-factor.

Incidentally, ever wonder why Chris Christie wasn’t on the GOP ticket? This book reportedly tells us why:

Romney initially crossed Christie off his short list. The governor’s vetting file was incomplete, and Romney had been bothered by Christie’s propensity to show up late at campaign events and by his lack of physical fitness, the book says.

“Romney marveled at Christie’s girth, his difficulties in making his way down the narrow aisle of the campaign bus,” the authors write. “Watching a video of Christie without his suit jacket on, Romney cackled to his aides, ‘Guys! Look at that!’”

According to a memo published in the book, the unanswered questions included those about a defamation lawsuit from earlier in Christie’s career; a Securities and Exchange Commission settlement involving Christie’s brother, Todd; the names and documented status of Christie’s household employees; his clients from his time as a securities industry lobbyist; and his medical history.

Also revealed in the 2012 post-mortem is Harry Reid’s “imaginary” friend. Turns out, he wasn’t so imaginary after all.