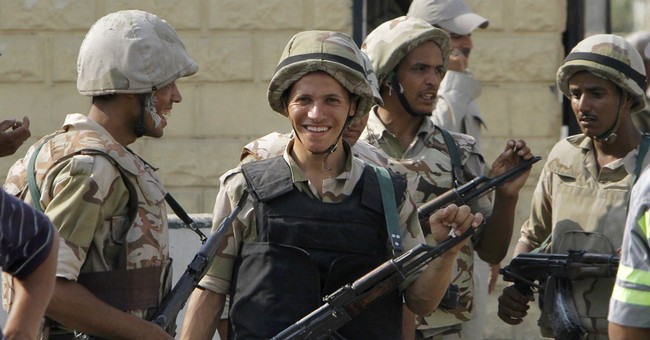 As syndicated columnist Charles Krauthammer sees it, there were only two plausible outcomes in Egypt: either the Egyptian people would accept the Muslim Brotherhood’s increasingly imperious and autocratic reign, or they'd demand a regime change (which they did) precipitated by the Egyptian military.

In the end, the lesser of two evils prevailed -- although the future of democracy in Egypt remains uncertain:

The military, brutal and bloody, is not a very appealing alternative. But it does matter what the Egyptian people think. The anti-Morsi demonstrations were the largest in recorded Egyptian history. Revolted by Morsi’s betrayal of a revolution intended as a new opening for individual dignity and democracy, the protesters explicitly demanded Morsi’s overthrow. And the vast majority seem to welcome the military repression aimed at abolishing the Islamist threat. It’s their only hope, however problematic, for an eventual democratic transition.

And which alternative better helps secure U.S. strategic interests? The list of those interests is long: (1) a secure Suez Canal, (2) friendly relations with the United States, (3) continued alliance with the pro-American Gulf Arabs and Jordanians, (4) retention of the Israel-Egypt peace treaty, (5) cooperation with the U.S. on terrorism, which in part involves (6) isolating Brotherhood-run Gaza.

Every one of which is jeopardized by Brotherhood rule.

What, then, should be our policy? The administration is right to deplore excessive violence and urge reconciliation. But let’s not fool ourselves into believing this is possible in any near future. Sissi crossed his Rubicon with the coup. It will either succeed or not. To advocate a middle way is to invite endless civil strife.

What’s more, he argues, cutting of U.S. aid to Egypt now would be utterly disastrous. And indeed, would make Washington even less relevant and influential in the region:

The best outcome would be a victorious military magnanimously offering, at some later date, to reintegrate the more moderate elements of what’s left of the Brotherhood.

But for now, we should not be cutting off aid, civilian or military, as many in Congress are demanding. It will have no effect, buy no influence and win no friends on either side of the Egyptian divide. We should instead be urging the quick establishment of a new cabinet of technocrats, rapidly increasing its authority as the soldiers gradually return to their barracks.

Generals are very bad at governance. Give the reins to people who actually know something. And charge them with reviving the economy and preparing the foundations for a democratic transition — most importantly, drafting a secular constitution that protects the rights of women and minorities.

The final step on that long democratic path should be elections. First municipal, then provincial, then national. As was shown in the post-World War II democratizations, the later the better.

Dr. K concludes with a rather depressing prognostication: under the Muslim Brotherhood, there was zero chance the seeds of democracy would one day spread to Egypt. None. On the other hand, he writes, under the rule of the Egyptian military -- that is, if and when the generals in control slowly cede power to technocrats and elected officials over time -- this much-hoped-for outcome is “slim” but not necessarily impossible. Building the institutions necessary for democracy to take hold in a nation where Christians are routinely sought out and slaughtered is no easy task. But with the Muslim Brotherhood now discredited and overthrown, Krauthammer argues, it’s at least a possibility.