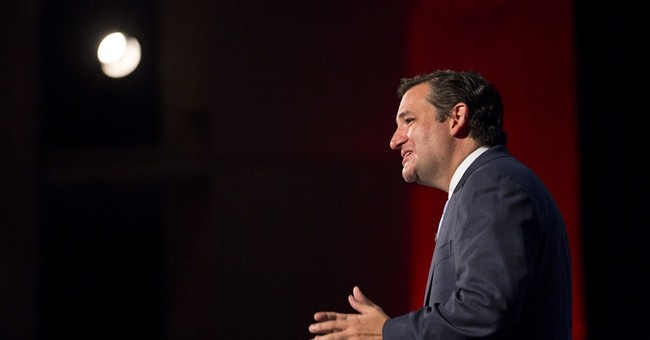 Speaking at a conservative summit in Ames, Iowa on Saturday (this should immediately raise a flag, no?) Texas Senator Ted Cruz took several rhetorical shots at the media and at the Democrats’ favorite liberal: Hillary Rodham Clinton.

Sen. Ted Cruz (R-Tex.) said Saturday that he thinks the mainstream media are “in love” with former secretary of state Hillary Clinton, but declined to say whether he backs the Republican National’s Committee’s threat to exclude NBC and CNN from the 2016 GOP primary debates if they don’t pull the plug on plans to produce films about her.

“I don’t think anybody is surprised to discover that the mainstream media are in love with Hillary Clinton. And indeed I would expect both of those movies to be released on Valentine’s Day,” Cruz told reporters.

RNC Chairman Reince Priebus is pressing for CNN and NBC to abandon plans to produce films about Clinton, given her status as a potential 2016 presidential candidate. CNN plans to produce a documentary, while NBC is producing a miniseries. If they don’t comply, Priebus says, then he will move ahead with plans to exclude them from the slate of RNC-approved debates.

Cruz was asked whether he backed the RNC’s position, but declined to say whether or not he does.

“The RNC will make its own decisions,” he said.

Interestingly, Cruz's father, Rafael, also spoke at the summit. He got a standing ovation.