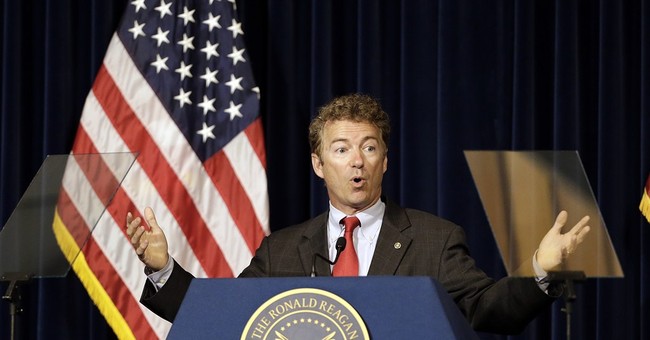 The big takeaway, of course, is not that Rand Paul is in the lead; it’s that Republicans are obviously unhappy with Marco Rubio:

PPP's newest look at the Republican field for 2016 finds some big changes from our previous polling. Marco Rubio, who had led all of our polling since December, has dropped all the way to 6th place.Rand Paul now has the lead nationally, to go along with the leads he posted in our most recent Iowa and New Hampshire polls. And Ted Cruz has already hit double digits.

The numbers are: Paul 16, Jeb Bush, Chris Christie, and Paul Ryan each at 13, Cruz at 12, Rubio at 10, Rick Santorum and Bobby Jindal at 4, and Susana Martinez at 2. Cruz has proven to be such a darling to the far right that he actually already leads among 'very conservative' voters with 20% to 18% for Paul and 17% for Ryan. Christie gets 24% with 'moderate' identifying Republicans but doesn't do better overall because he's at just 7% with 'very conservative' ones.

Rubio was at 21 or 22% on all of our polls between January and March but his support has now dropped to half that level. Meanwhile Paul has vaulted into the lead after starting the year at only 5% in our polling, perhaps owing to the positive attention he received from conservatives after his filibuster earlier this year. Christie and Bush have remained consistently in the 12-15% range in all of our polling.

I wonder why. Still, I suspect (and this is a point Allahpundit has made) these numbers are only temporary. For the moment, though, the base is justifiably apoplectic that Rubio ran as a tea party conservative in 2010 -- only to champion a watered down immigration reform bill three years later that failed to adequately secure the border. Did he betray his constituents? I’ll leave that question to you. But it’s important to remember, my friends, that the 2016 election is a hell of a long way off. Will the base still hold a grudge against him three years from now when he’s touting his amazing life story and his conservative bona fides on other big issues? No doubt other presidential candidates will attack him from the Right, but I wouldn’t be surprised to see him tout his “Gang of Eight” experience as compelling evidence he's “bipartisan” and “electable." Yes, Ted Cruz is incredibly popular among conservatives -- and his popularity is growing day by day -- but can he move to the middle and reach moderate voters like Rubio presumably could in a general election?

At the same time, what’s also fascinating about this poll -- perhaps more fascinating than a Libertarian-leaning candidate like Rand Paul leading the charge at this early stage -- is that if Hillary Clinton doesn’t run, the Democrats are probably in deep trouble:

The Republicans are looking more competitive with Hillary Clinton than they were in some of our earlier polling this year. She still leads all of the GOP hopefuls but in many of the cases it's by tight margins- 1 point over Chris Christie at 43/42, 2 points over Paul Ryan at 46/44, 3 points over Jeb Bush at 44/41, 5 points over Marco Rubio at 45/40, and 8 points over Rand Paul at 47/39. Obviously it's early but you can see a picture here that's been painted in many key Senate races over the last two cycles- the person with the most support from Republicans is also the weakest general election candidate.

Joe Biden does on average 6 points worse than Hillary against the various Republican possibilities. He trails Christie by 6 points at 45/39, Bush by 4 points at 45/41, and Ryan by 3 points at 46/43. He does at least manage ties with Paul and Rubio at 43% and 42% respectively.

Clinton continues to dominate the Democratic race, although her 40 point lead this month is down a bit from 50 and 46 points on our previous two polls. She's at 52% to 12% for Biden, 6% for Elizabeth Warren, 5% for Kirsten Gillibrand, and 3% for Cory Booker with no one else above 2%.

If Hillary is out, presumably that means Biden is in? And after that, Democrats have Elizabeth Warren to fall back on? Please. This isn’t to say that another dark horse candidate (or one of these obviously second-tier candidates) couldn’t emerge and sweep the nomination and then maybe win the general, but can there be any doubt that absent a Hillary Clinton run, the GOP field in 2016 is infinitely stronger? Plus, after four years of Hope and Change, isn’t there a chance that Obama-fatigue will finally set in? Virtually every Republican thinking about running for president in 2016 is competitive against Hillary Clinton. This bodes well for Republicans. And best of all, if she doesn’t run, the GOP’s prospects look even brighter.