Wonderful: Employers in Maryland Already Cutting Back Workers’ Hours Because of Obamacare 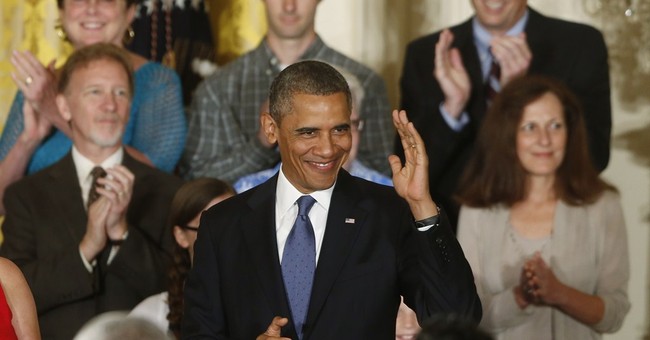 Well, my friends, we certainly saw this coming didn’t we? (H/T WFB):

“My job that I currently have is part-time, and they don’t want to let me be full-time”

This is one of the worst elements of what can only be described as a disastrous law. The percentage of Americans out of work or underemployed is still stubbornly high, of course, and yet Obamacare as written is creating perverse incentives for employers to cut workers’ hours and lay people off. Splendid. Shouldn’t public policies be crafted to facilitate growth? Evidently Obamacare is having the complete opposite effect on American businesses. Perhaps this is why the president unilaterally delayed one of the Affordable Care Act’s most contentious provisions, a maneuver that has Congressional Republicans justifiably up-in-arms.

Speaking of which, the president gave a speech today from the East Room in part defending his legislation. Greg caught the video:

This is just an example of how the Affordable care act is doing what it’s designed to do. Deliver more choices, better benefits, a check on rising costs, and high quality health care. That’s what it was designed to do and we’re already seeing those effects take place.

Mr. President, if Obamacare is "working the way it's supposed to," you've made a pretty strong case for fully defunding it #DefundObamacare

President Obama cited one specific example during his remarks (in Maryland, of all places) arguing that his health care law is reducing premiums and saving middle class Americans money. Go tell that to people living in California or Louisiana. Never mind also that the total cost for Obamacare has (unsurprisingly) nearly doubled since it was first signed into law, even though 30 million Americans will still be uninsured, according to the CBO. The president, meanwhile, is facing harsh criticisms for unilaterally delaying the employer mandate for one additional year (which of course helps corporations and large employers), but leaves individuals hanging out to dry. As a consequence, House Republicans are now trying to level the playing field:

The Republican-led House voted on Wednesday to delay core provisions of President Barack Obama's health care law, emboldened by the administration's concession that requiring companies to provide coverage for their workers next year may be too complicated.

After a day of heated rhetoric, the House voted largely along party lines, 264-161, to delay by one year the so-called employer mandate of the Affordable Care Act. It voted 251-174 to extend a similar grace period to virtually all Americans who will be required to obtain coverage beginning Jan. 1, the linchpin of the law.

The dual political-show votes marked the 38th time the GOP majority has tried to eliminate, defund or scale back the unpopular law since Republicans took control of the House in January 2011. The House legislation stands no chance in the Democratic-run Senate.

The House of Representatives has voted 37 times to repeal all or parts of Obamacare. That’s impossible as long as Democrats control both the upper chamber and the White House. Still, a majority of Americans presumably support what House Republicans are trying to do. By the way, Secretary Kathleen Sebelius wants you to believe that the torturous process of implementing Obamacare is going swimmingly. Hint: it’s not.