Jimmy Carter on Zimmerman Trial: The Jury Made “the Right Decision” 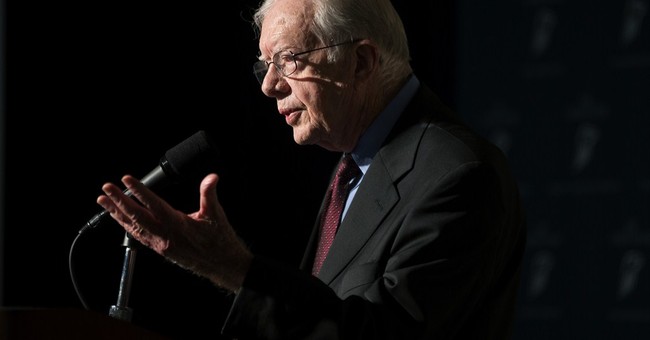 President H.W. Bush isn’t the only former president coming out of retirement lately. On Tuesday, Jimmy Carter weighed in on one of the most explosive trials in recent memory, expressing his satisfaction with the jury’s verdict that 29-year-old George Zimmerman was not guilty (via USA Today):

Former president Jimmy Carter said the jury in the George Zimmerman trial "made the right decision" and agrees with President Obama that Americans should respect its judgment.

Zimmerman, a neighborhood watch volunteer, was acquitted last Saturday in the shooting death of Florida teenager Trayvon Martin. Carter, the nation's 39th president, made his comments about the high-profile case in an interview Tuesday with WXIA in Atlanta.

"I think the jury made the right decision based on the evidence presented because the prosecution inadvertently set the standard so high that the jury had to be convinced that it was a deliberate act by Zimmerman and that he was not at all defending himself," Carter said.

"It's not a moral question," he continued, "it was a legal question and the American law requires that the jury listens to the evidence presented."

Trayvon's death sparked outcry over Florida's "stand your ground" laws and a national debate over racial profiling. State prosecutors argued during the trial that Zimmerman profiled and murdered the teenager, then lied about the Trayvon initiating the fight.

Nearly half the public agrees with Carter’s appraisal, according to the only scientific survey available as of this writing. But this general consensus is hardly convincing until we see more polling data. Still, what will be devastating for the media establishment -- and one network in particular if these numbers hold true -- is how radically out of step they are with ordinary Americans. Some anchors are already invoking stunning hyperbole and calling the outcome “an atrocity” and “a slap in the face.” Meanwhile, MSNBC released its own (unscientific) survey showing that more than half of Americans support the verdict.

In any case, mass protests erupted across the nation as soon as the verdict was read in part because many Americans felt Trayvon Martin didn’t receive equal justice under the law. But from a legal standpoint, as Carter notes, it would have been preposterous for George Zimmerman to have been convicted of second degree murder given the facts of the case. The prosecution overreached. Meanwhile, the NAACP is still decrying racism (you know, that same organization that recently banned conservative activists from their conference), but at the very least, a healthy plurality feel the trial was fair.

We’ll see if public sentiment changes in the coming days. But for now it seems most Americans agree with the jury’s decision.